Have you ever been in a situation where you can’t make it for important business conferences or family gatherings? But what if there’s a way to be present on every occasion (literally), without traveling physically?

With the advance evolvement in technology, now everything is possible. If you’re the one who needs to be in every meeting simultaneously, Telepresence robots is your solution. Stimulating a virtual present, users can now interact with others at a different location and at a completely different time zone.

Here, let’s understand what Telepresence Robots truly is and how it can benefit our everyday life. 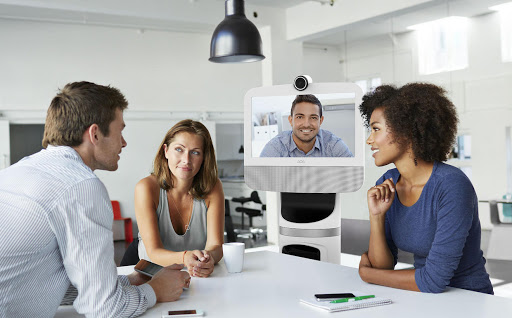 What is a Telepresence Robot?

In the simplest form of an answer, a Telepresence Robot is basically a wheeled ‘Skype’ machine. Commonly equipped with a monitor, camera, speakers, and microphone, telepresence can be controlled remotely by the user via a computer, tablet or even a smartphone. Though some of these robots are stationary, most of them come with wheels for mobility.

Also referred to as Virtual Presence Robots, Telepresence robot enables the user to extend their presence anywhere and anytime. Whether they are physically present for the meeting or not, the use of telepresence robots enable a user to interact with the other party effectively. Hence, it’s cost-saving and effective.

One thing for sure, not all Telepresence Robots looks and works the same. Depends on their functionalities, they can be different in sizes, shape, and features. While some are designed specifically for one task, others can be customized based on the user’s needs. Let’s have a look at some examples of these robots.

With the increasing demands, the variations of Telepresence Robots is extensive. Hence, robotics companies like Double Robotics, Ava Robotics, Segway Communications, Ohmi, and more getting committed to the innovation of Virtual Presence Robots. And these robots include the following; 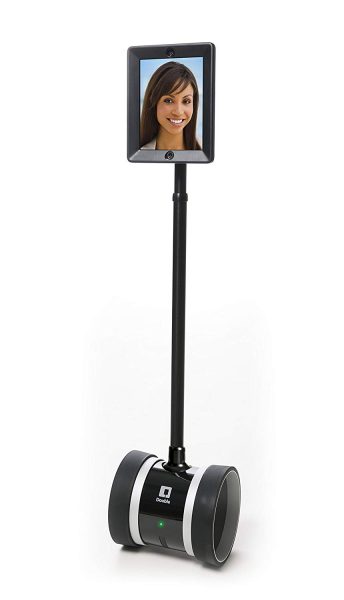 Double Robotics’ is arguably the most popular Telepresence Robot in the market. Featuring a minimalistic design, this robot is both durable and adds a touch of elegance to your workspace. It has a 2-wheel rolling base that makes sure it’s sturdy and with its unique balancing algorithm promotes stable mobility even on an uneven surface. And when there’s no motion detected, two kick-stands will deploy automatically; one in front and one in the back for keeping it still.

The durable battery lifespan enables this telepresence robot to operate approximately up to 8 hours. With the quick charging mode, it takes only 2 hours for the robots to be fully recharged. For those who want customizations, this virtual presence robot comes with an adjustable height function. Hence, the user can easily adjust the height to maintain good eye contact with the other party during a conversation.

By using the OpenTok app on a mobile or tablet, a user unlocks the full-control over the Double robot remotely. That includes the intuitive user interface and encrypted video to guarantee security and privacy. Ipads are mainly used for the Double, mainly because of their integrated cameras. However, only the iPads with 2nd generation and above works on the Double. 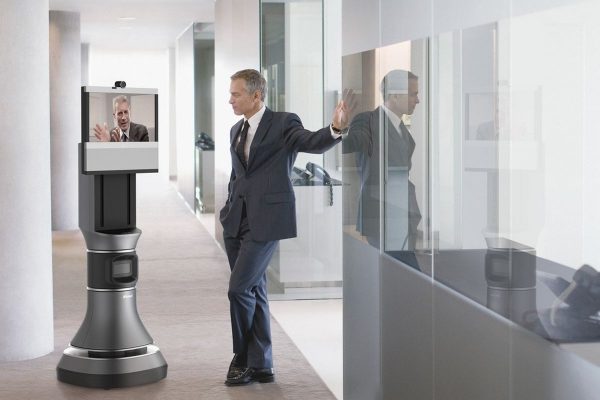 As one of the higher-end Telepresence Robot on the list,  Ava 500 by Ava Robotics features an exclusive set of functionalities.  That includes Obstacle Detection and Obstacle Avoidance capabilities. Equipped with a laser, 3D imaging, and sonar technologies, this robot is especially effective to avoid collisions even in a crowded place.

To match up the price, Ava 500 also features an exceptional mapping capability. Wherein, users can pinpoint their destination accurately, and the Ava 500 will receive the signal and react accordingly. Similar to Double’s height adjusting functionality, Ava 500 can support screen adjustments too. So, whether you’re sitting or walking, the robots won’t leave your sights.

Did you know that telepresence robots play a significant role in the healthcare industry, especially in a hospital? Hence, if you’re looking for an alternative to physical nurses or a companion, telepresences robots come quite handy in this case.

This is the RP-Vita developed by iRobot and InTouch Health is made specifically to aid medical professionals in the exchange for information in healthcare environments and as improved assistance to patients. Actively utilized in numerous hospitals, telepresence robots come hand-in-hand to physical medical personnel capabilities. Doing what nurses can do, RP-Vita is able to observe and guide patients specifically to their demands.

Apart from that, the RP-Vita can also be used to access recorded information through data ports. It is also compatible with many ultrasound imaging machines, digital stethoscopes, and many more. One vital role is that Vita is able to send data effectively and accurately to doctors from almost any types of medical devices that support USB connection.

Though the looks of the RP-Vita may look intimidating, it features simple-to-use iPad interface, and its automatic docking function guarantees that it remains charged in case of an emergency. The Vita comes with an automated navigation system, allowing for smooth mobility and secure travel without requiring user supervision. The best part, it also functions as backup storage in retrieving information from various patients autonomously.

Telepresence robots provide more benefits than you can imagine. Regardless of your professions, the use of telepresence robots is reliable to help you get work done effectively. Even during urgent situations and emergencies.

Not convinced? Read up where we justify why there are beneficial to mankind.

The use of telepresence robots can shave-off unforeseen expenses effectively like flights, hotels, and other transportation. In the case you need to travel to get your job done, telepresence robots work perfectly as an alternative to your problems. Not to mention, it’s safe and secured. Without physical travel, you’ll not be accounted for any injuries. In a nutshell, investing in a telepresence robot might seems to a huge commitment at first. In the long-term, it’s wallet-friendly and versatile too.

It efficient in many ways, one of them is time-saving. Instead of wasting your time queuing in line at the airport or stuck in a traffic jam, you can actually get your job done within a more efficient way with telepresence robots. Plus, it boosts your job performances with efficient delegation of time to your tasks. Brush the stress off your shoulder, and start working efficiently now.

We can’t deny the benefits of having these modern technologies that is especially helpful in our daily lives. Though some might be skeptical with the use of these telepresence robots, particularly for its functionalities. The benefits it brought us is undeniable. So, if you’re those who are busy running an enterprise but want to have a work-life balance. Invest in a telepresence Robot now to stay connected without neglecting the other party.