With the rise of cryptocurrencies and online shops, purchases are now more convenient than before. This allows people to skip going to the store to buy something they need. This is especially advantageous for people like gamers that want to buy games in an instant. This is possible through methods such as PSN top-ups, Microsoft Rewards and registering your credit card to different services.

These services are not only useful when purchasing items but they can also grant you rewards as you continue to earn them. Arguably, one of the most popular forms of online currency is the Microsoft Rewards program. By doing performing day-to-day tasks, you’ll be able to earn points that you can save up for great deals. Curious about how Microsoft Rewards work? Don’t worry as we’ll discuss everything that you need to know about it.

You might ask how did Microsoft Rewards start and what previous services under their company gave out points. Well, one of the first Microsoft subscriptions that awarded a points system was the Xbox Live Marketplace. Xbox Live was Microsoft’s platform that allows players to purchase games and add-ons as well as to connect to online capabilities.

To purchase products with Microsoft points, users were tasked to purchase top-up cards that can be bought with real money. Different amounts of points have their specific real-life currency value or can be purchased via credit card. These points allow players to buy digital copies of games, as well as downloadable content. Since then, Microsoft has replaced its use of points in the Marketplace with real-life currency values.

Another predecessor to Microsoft Rewards was the Bing Rewards program. Users can earn rewards by using the Bing search engine on their day-to-day surfing. This rewards program started in 2010 has since been replaced with Microsoft Rewards. This allowed for a broader scope of rewards as well as more ways of earning them.

How to Earn Microsoft Rewards Points?

First and foremost, you’ll need to create a Microsoft account which you can do on your desktop or device right now. This allows your account to be linked to other services under Microsoft’s umbrella. Then, you’ll have to complete the registration process to start earning Microsoft Rewards points. Next, you’ll have to use those linked services to your account like Bing’s search function.

Want to earn Microsoft Rewards points using Bing? It’s very easy and the same as when the program was still named Bing Rewards. All you need to earn reward points is by using Bing as your search engine. By searching for websites, you’ll accumulate points without too much effort and it’ll be even faster by using Bing on Microsoft Edge.

Another way to earn rewards points is by shopping online using the Microsoft Store program. You can do this through your browser, mobile devices or the app on your Xbox console.

Lastly, you can earn more points by answering surveys and completing weekly tasks. These tasks include “quests” that refreshes weekly, daily quizzes and offers which you can participate in.

Earlier, we wrote about earning Microsoft Rewards points by just playing with your Xbox. We’ll discuss that in-depth in the next section.

Earn Points Via Your Xbox

Microsoft’s powerful line of consoles–the Xbox is also a great way to earn Microsoft Points. Imagine getting rewards for sitting on your couch the whole day and playing your favorite video games. That is a dream for gamers everywhere in the world. This is possible for Xbox players that are also subscribers to both Xbox Gamepass and Gamepass Ultimate.

For those who are not familiar with this service, both Xbox Gamepass options allow subscribers to play games that were designed for older consoles. Yes, you read that correctly my friend! You’ll have access to a ton of titles that will remind you of your childhood. The only difference between the two options is that the Ultimate version is usable for PC as well and comes with a Gold Live subscription.

So with that out of the way, how do we earn Microsoft Points as Xbox users?

First, you need to have the Microsoft Rewards app on your console. This is a great way to track down how many points do you currently own. Next, you need to make sure that your console is indeed online with a decent internet connection. Then, you can now check the quests that will reward you points if you complete them. These quests require you to play specific games and get achievements to get the maximum points available.

Uses and Redeeming of Rewards

One of the more popular uses of Microsoft Rewards points is the ability to get great deals. You can save up your points and finally get that deal that you have been targetting. Whether it’s a discount on a game, movie or something you’ve been wanting to buy on the Microsoft store. To check or redeem possible deals, you can check your Microsoft Rewards app and see what is currently being offered. Microsoft Rewards points are also a great way to get deals on subscriptions for Microsoft platforms like Xbox Live.

Be mindful however that if you don’t spend your points in 18 months, those rewards points you’ve been saving will expire. However, it’ll be rare to not see something enticing in the Microsoft store. Another thing to consider is that as of this moment, Microsoft Rewards is only available in select countries. It is better to research beforehand if your country is part of the scope of Microsoft Rewards. 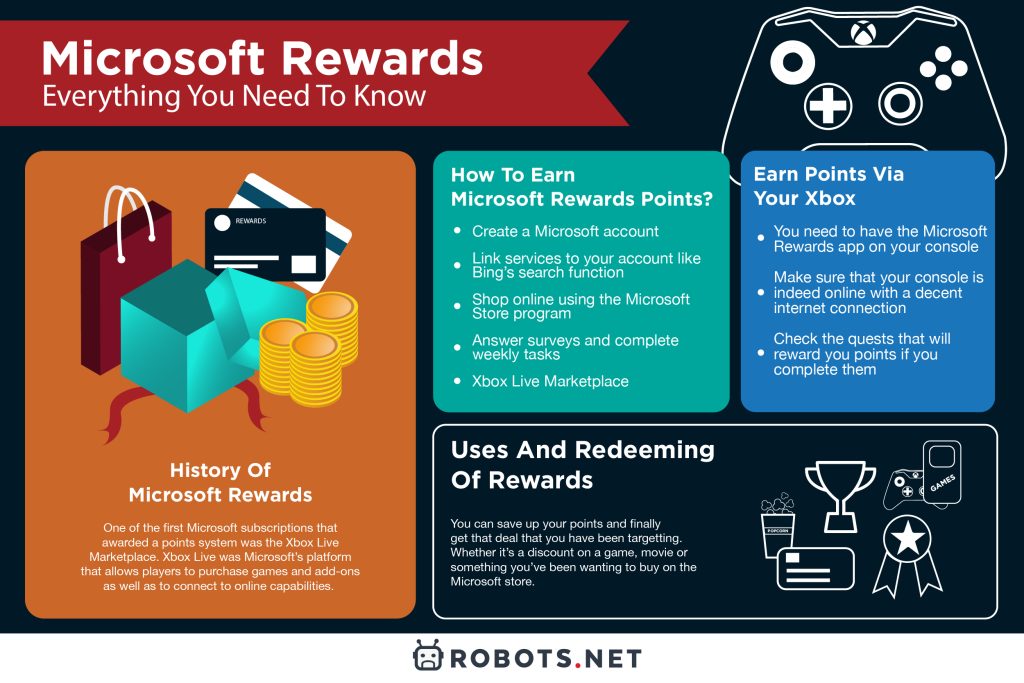