When it comes to customizing your PC to its maximum potential, PC fan controllers may be the last thing that comes to mind. However, a reliable fan controller will help improve the longevity of your computer as it is crucial for cooling down your system.

In this article, we cast the spotlight on 10 of the best PC fan controllers you can buy to optimize your computer’s performance. We’ll also give you a comprehensive guide on how to choose the most appropriate PC fan controller for your device.

Choosing The Right PC Fan Controller For You

Before you get started, consider the following questions:

If you already have an overview of what type of PC fan controllers you need, here are important things to consider before making the purchase:

Assess how often you want to monitor the performance of your PC fans. The majority of displays on the fan controllers are straightforward and provide basic information like temperature and rotations per minute (RPM). Several PC fan controllers include software, allowing you to customize them with an app on your PC. Although displays aren’t necessary, they are still handy for providing you with basic information.

The next step is to identify if you prefer a digital or analog fan controller. Analog controllers are operated manually, letting you adjust the fans’ speeds within a specific range. On the contrary, digital controllers regulate fan speeds through the use of an app and offer options for adjusting fans’ speeds. Both types have their downsides and perks.

Digital fan controllers offer minimal control over your fan’s speed. However, they perform the greater load of distributing and calculating power according to the processor. Hence, they are more user-friendly and will only require minimal technical knowledge.

A single PWM control channel is more than sufficient if you prefer hooking up case fans to your PC fan controller. However, if you want to connect both case and CPU cooler fans to your PC fan controller, choose at least two or more PWM channels. Having a single-channel device will disrupt the fan and noise performance since all fans will either be altered with the information given by a single case fan or the information given from the CPU fans.

If you already have a case that has non-PWM and PWM fans, the best fan controller is the one that is compatible with PWM control for non-PWM fans. Your non-PWM fans will not perform at maximum speed all the time. The motherboard can also automatically configure the speed and voltage of the fans.

The drawback is that if a controller can support PWM control to non-PWM fans, it is integrated with one PWM control channel only. 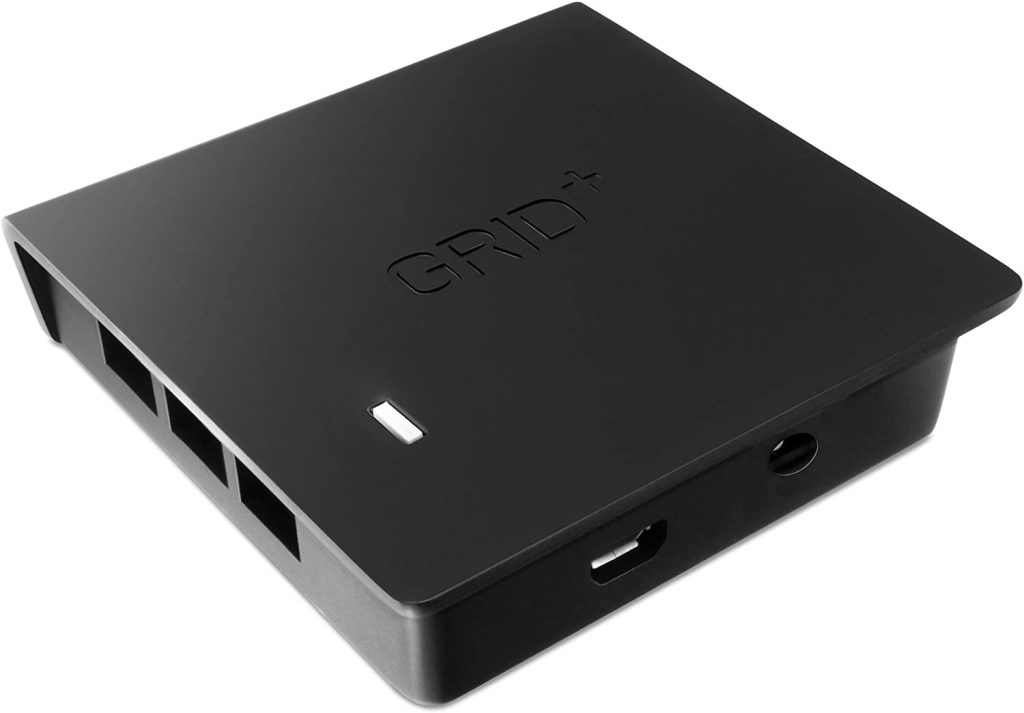 NZXT GRID+V2 features a straightforward design and aesthetic. This PC fan controller utilizes CAM software that gives you the convenience to easily modulate and control the fans. The GRID+V2 can control a maximum of six different four-pin or three-pin fans. The app itself is built-in with preset fan configurations to get started easily, with minimal technical knowledge required.

This digital fan controller is perfect if you prefer to have greater control over your fans. The NZXT GRID+V2 also integrates both variable and non-rational installation methods for simple and self-explanatory fan control.

This PC fan controller will require a decent amount of installation space. It facilitates a maximum of six RGB fans per channel or four strips per channel, providing users with flexible options to utilize up to 12 fans, eight light strips, or both.

In summary, the Corsair Commander PRO is the ideal PC fan controller if you have numerous Corsair LED strips and RGB fans. 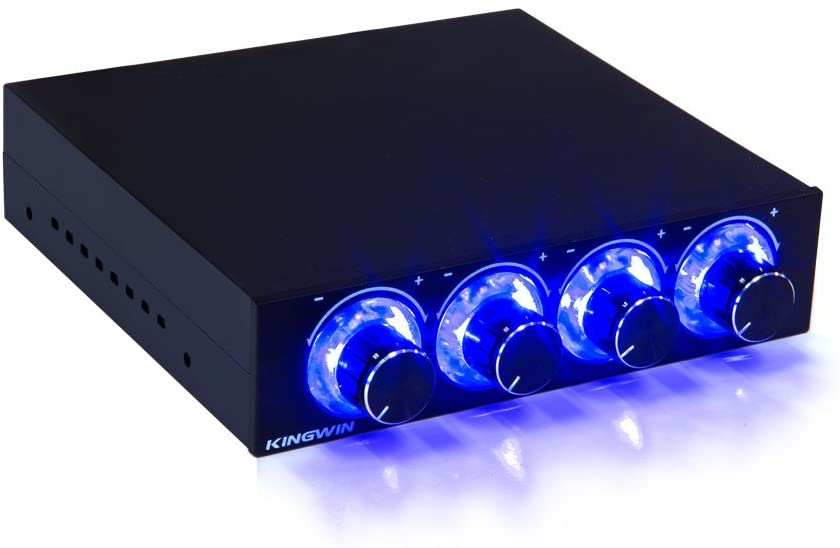 If you prefer a more affordable PC fan controller, the Kingwin FPX-001 Fan Controller is one of the best options. It features speed adjustment knobs for a maximum of four fans. The downside is that this PC fan controller only permits 3-pin fan connections.

This fan controller also comes equipped with LED lights and indicators that display the active status of your fans. The Kingwin FPX-001 is easy to install, fitting easily in the standard 3.5” front bay casing slot of the computer that makes it portable to use. 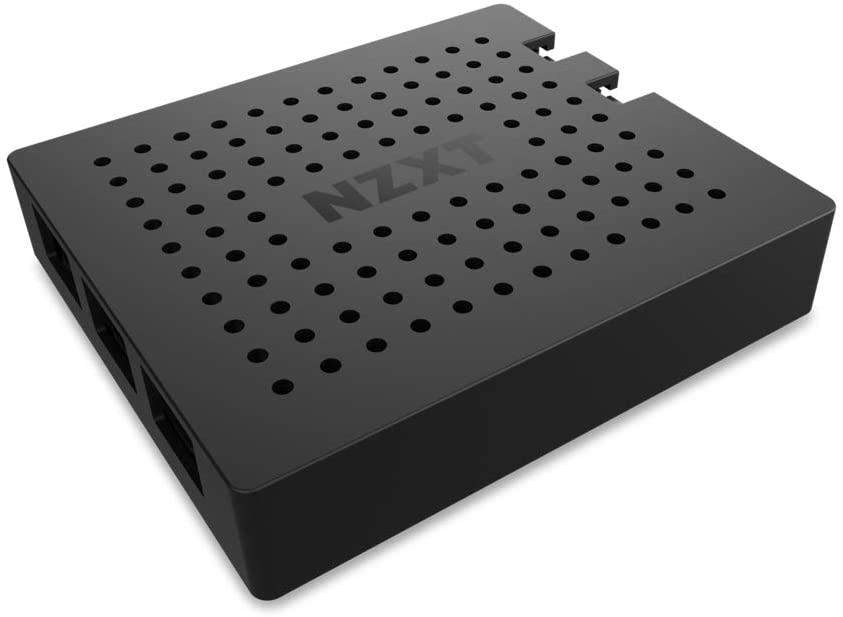 ZXT RGB & Fan Controller AC-2RGBBC-B1 is the best PC fan controller for LED strips, RGB fans, or other RGB accessories manufactured by NZXT. It is built with three fan channels and two RGB connectors, providing you with the option to control a maximum of five NZXT Aer RGB fans or four LED strips. The three fan headers can also facilitate more fans via splitters; however, ensure that the total power limit for each channel is 10W.

Given its small size, NZXT RGB & Fan Controller AC-2RGBC-B1 is very easy to install. To control the PWM or custom fan profiles as well as configure RGB effects, the NZXT CAM software must be installed. Hence, the RGB control is limited and exclusive to NZXT RGB fans.

Thermaltake Commander FT Touch Screen is built with an expansive 5.5” touchscreen for seamless interaction. This PC fan controller lets you monitor fan temperatures and speeds for up to five individual three-pin or four-pin fans. The Thermaltake Commander FT can run in silent, manual, or automatic modes, providing users with flexible options. The sole downside of this PC fan controller is that it doesn’t support PWM channels. 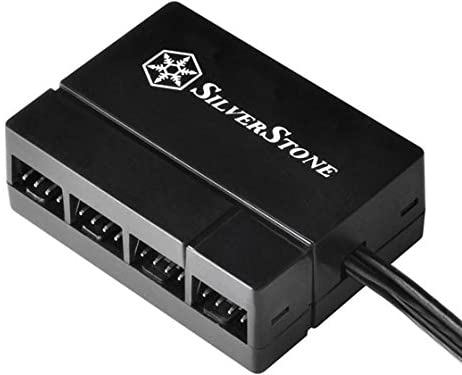 SilverStone PWM Fan Hub System CPF04 lets you configure a maximum of eight PWM fans all at once by connecting the controller with the motherboard’s PWM fan connector. You can also connect more PWM fans if you’re using splitters. With the SilverStone PWM Fan Hub System CPF04, you won’t have a fan remote control. You also cannot manually configure the fans, as this PC fan controller doesn’t support PWM control for three-pin non-PWM fans.

During the installation of the controller, the PWM control must take information from the fan connected to Fan 1. Overall, it is the perfect solution for the configuration of PWM case fans all at once. If you currently don’t have PWM case fans or connect both CPU cooler fans and case to the controller, purchase a fan controller with multiple PWM channels as an alternative. 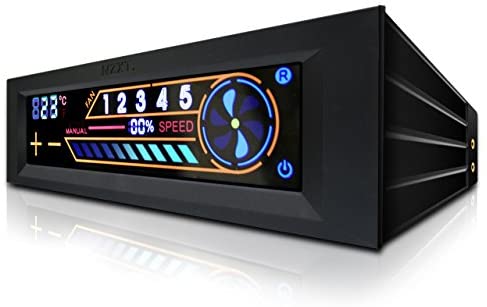 The NZXT SENTRY LX has a bigger dual bay fan controller and is developed with a display to boot. This PC fan controller features both manual and automatic modes for the configuration of fan speeds.

With the NZXT SENTRY LX, you will get notified when temperatures are beyond safe ranges. When the controller is disabled, the calendar and fan settings are saved. The only drawback is that it is only compatible with 3-pin connectors.

Another disadvantage is it utilizes 5.25” bays. On the surface, it may not be an issue since disk drives are less essential nowadays. Hence, it is the underlying problem. Since 5.25” bays are not essential, they are missing from several cases altogether and some of them won’t go out of their way to develop them within the cases. 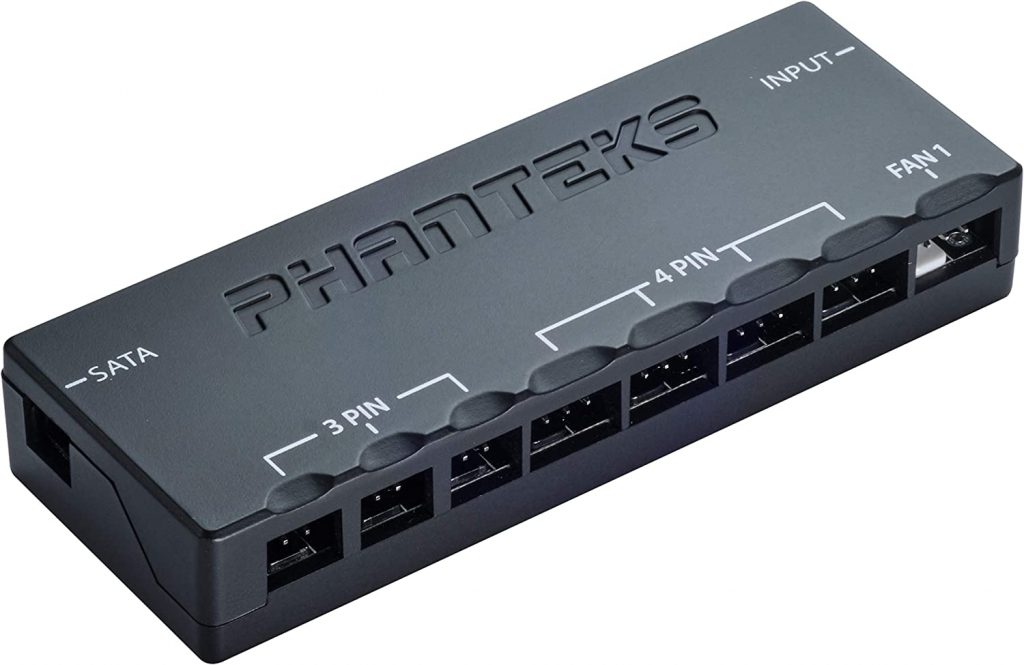 The Phanteks Universal Fan Controller PH-PWHUB-02 is one of the more intriguing PC fan controllers. It has three 3-pin headers for non-PWM fans but also has five 4-pin headers for PWM fans for receiving PWM control when connected to the controller. If you have fan headers, you can configure more fans. The disadvantage is that this PC fan controller has one PWM channel only that utilizes data from the fan hooked up to Fan 1. It is an ideal option if you have both the non-PWM and PWM case fans and control them automatically at once.

This PC fan controller includes a fan speed remote; however, it only has three-speed presets. As such, it is better to hook up the controller to a PWM fan header to the motherboard because you don’t have the option to use them at the same time. In summary, it is an excellent PC fan controller if you have both non-PWM and PWM fans. 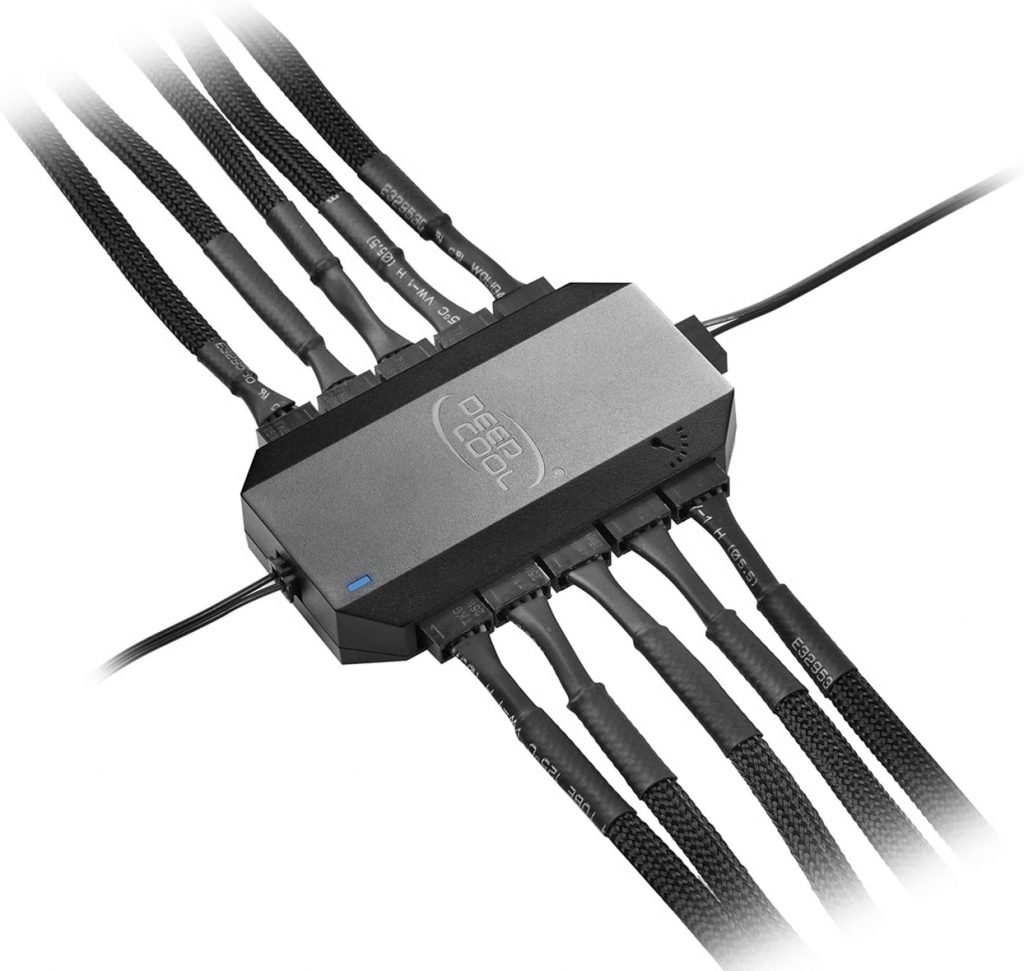 The DEEPCOOL FH-10 Integrated Fan Hub is one of the best options to control a maximum of ten fans at once. If you have splitters, you can even control more than ten fans. This PC fan controller has ten 4-pin headers that will support both non-PWM and PWM fans. The only variation is that non-PWM fans can’t be configured automatically; hence, running at maximum speed.

This PC fan controller also has a 4-pin connector and a SATA power connector that is connected to the motherboard’s PWM connector. The DEEPCOOL FH-10 Integrated Fan Hub supports a single PWM channel only. As a result, all fans will be configured according to the data from the unit hooked up to the Fan 1 header. Although it doesn’t have special features, FH-10 is still an excellent PC fan controller for organizing numerous case fans simultaneously. 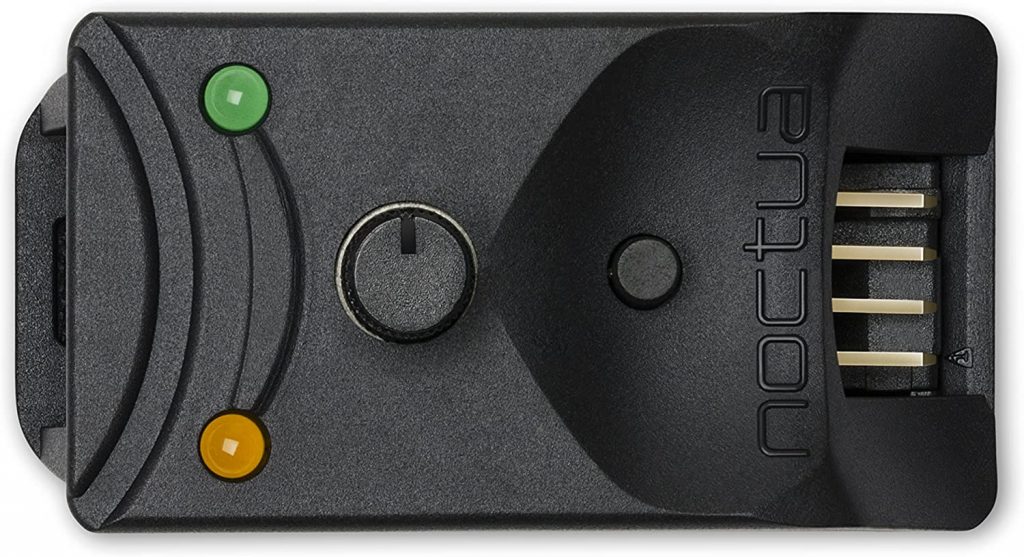 The Noctua NA-FC1 is a small fan controller that is integrated with one fan header. It can control a maximum of three fans through the built-in 3-way splitter. Noctua supports automatic and manual control PWM via a small knob.

Users can connect to one of the motherboard’s 4-pin fan header, resulting in a PWM fan control of a maximum of three fans via manual configuration. Although the Noctua NA-FC1 can also work with non-PWM fans, the control is only made through the tiny knob manually. In summary, Noctua’s NA-FC1 is a simple yet the most effective solution for users who

currently have a motherboard with only one or two fan headers. It’s also ideal for users who prefer a manual control without eliminating the automatic PWM control feature.

The Best Fan Controllers For Your Computer

Choosing the best fan controllers for your computer can be an arduous task as there are so many options available on the market. However, with this guide on hand, it’ll be easy for you to find one that suits your needs!