Online gaming has become somewhat of a beast in modern-day. In the past, it was viewed to be a pastime and a form of entertainment for kids. Nowadays, it’s gotten so big that there’s an entire category for e-sports that people can’t ignore. Pro gamer is now a legitimate job to aspire to and gaming has become very serious and very competitive.

These days both pro and casual gamers alike build the best (or most reasonable) rigs possible in order to game in the best possible way. Perhaps you’re one such person and that’s why you’re reading this right now. Maybe you’ve even already built a gaming PC and want to level up your gaming experience with a gaming VPN. That’s exactly why we’re here: to give you the best guide to choose the best gaming VPN for your needs.

Lags Can Ruin Your Games

Have you ever experienced lag when online gaming? Unless you’re one of those blessed, blessed souls without problems in life, you probably already have. And if you have, you’d know as well as I do that lag in gaming sucks. It can tamper with your game not only a little bit but it can also ruin your entire game! Lag can make you lose in any game you’re playing even when you have a fast internet connection.

If you think that lag is just a part of gaming, then you’re thinking way too narrowly, my friend. Lag can actually virtually disappear when you have the right tools. It’s not just about asking “how much Mbps do I need for gaming?” Don’t get me wrong, internet speed does play a part (for seamless gameplay, you’ll probably want 15-20 Mbps). You can check online gaming speed test websites and improve your speed, but there’s actually another factor at play. Want to know how to reduce lag in Minecraft or PUBG? Then you should learn a little bit more about ping and why it’s important.

First off, when you’re playing an online game, it can be frustrating to play with a lot of lag. Even when you avail of the best internet service packages, games can lag. The culprit? Well, you probably have too high a ping.

Ping is a very important aspect of computing. If you have to ask about what it is, you probably don’t know anything about how it affects your gaming experience. Ping is basically the reaction time your computer has when responding to a request from another computer. It measures the latency your machine has: the amount of time it takes to receive a packet of data from a server.

What is ping in gaming? Ping basically determines how much lag you’re going to get while playing your online game. The lower the ping the better. However, it’s not always going to be that ideal. That’s why people have a gaming ping test to check how high or low their ping is. A good ping for gaming is normally 50 milliseconds or lower. Learn more about what’s the ideal gaming speed.

So now that you know ping is important, how do you get a ping booster? Isn’t there any way to reduce latency between your PC and gaming servers? Lucky for us, there is.

Why Use A Gaming VPN?

Okay, you’ve probably heard of VPNs before. They’re services that help you mask your IP in order to appear as though you’re in a different location. They also encrypt data and keep your connections private and secure. So how does a VPN affect gaming, you ask? Well, you might be surprised but there’s actually a good amount of reasons why gaming VPNs are important.

A high ping is inevitable when your connection isn’t all that close to the game’s server. For this reason, a gaming VPN can be a pretty handy tool. A good ping for gaming is typically 50ms or lower. If you can connect to a server that’s close to the online game’s server, there will be less ping as you game. Your gaming experience will practically be legless.

If you don’t know what a DoS attack is, it’s a Denial of Service attack that almost anyone with any technical know-how can use. With the use of a gaming VPN, your network and gaming traffic will all be encrypted. This will make it difficult for DDoS attacks and hackers to push through.

3. Getting Games Ahead Of Schedule

This kind of thing isn’t only restricted to premium movies and videos. Sometimes you find a blocked game online because of where you live. With a gaming VPN, you’ll have access to all of these games. There are virtually no restricted games when you employ a gaming VPN.

5. Playing With Others Outside Your Region

When it comes to playing online games with a friend who lives abroad, it can be kind of difficult. If you’re playing within New York City, you’ll most likely get to play multiplayer games with people in the area. However, if you wish to access a server that’s in South Korea for example, then you’ll need to use a gaming VPN. If you do this then you’ll get to play with all your friends studying abroad.

Unfortunately, this is the sad reality for most online gamers. Some ISPs throttle or limit your connection speed when a large amount of data is being transferred within your network. Since your ISP can detect your network traffic, this will most likely happen for most gamers. However, if you use a gaming VPN, you can work around this disadvantage. A VPN will block your ISP from seeing your network traffic and data usage so they can’t throttle your connection.

As you can see, there are many benefits to employing a gaming VPN. It’s not just to reduce ping and improve the gaming experience. Having a gaming VPN can even save you some of the hassles and inconveniences of gaming from a remote location. Overall, VPNs are a great service to have not just for gamers but even for the average person. Now, that doesn’t mean you just go ahead and procure any kind of VPN willy-nilly. There are a few considerations to be had when choosing the best VPN for you.

So you’re finally convinced of buying your own gaming VPN. If you access a VPN online that doesn’t necessarily guarantee the best gaming experience. So, before you search “gaming VPN” online and sign up for the first one you see, let’s dive into the criteria for what’s a good gaming VPN. In this section, we’ll discuss the considerations for picking the best VPN for gaming.

Perhaps you’re looking forward to the latest release by Nord games and you want the absolute best experience possible. That means you’d want little to no lag to ensure that you can game smoothly. If you want this kind of experience, then you should consider the location of your VPN server. A good gaming VPN doesn’t always have the most amount of servers. Sometimes it can mean just having servers in places that are crucial — places where gaming servers are mostly hosted. If your gaming VPN of choice has servers in critical areas, then that’s a big plus.

Sometimes there are VPNs dedicated to gaming. These kinds of gaming VPNs are optimized to best suit the needs of gamers (little latency and ping). They’re also more optimized to give the best protection against DDoS attacks and hacks within your network.

Can any VPN work? What type of VPN server for gaming is needed? Good question. Not all VPNs will have P2P Connection which is crucial for a lot of online games. That’s because P2P (or peer-to-peer) connection traffic is needed for most online fighting games. If your gaming VPN doesn’t have this connection, then it’s almost useless to your gaming experience. Make sure to look for this specifically when you’re canvassing for options.

At home, you might have more than one gaming platform. Perhaps apart from playing PUBG and Counter-Strike on a PC, you play games on your Playstation or Nintendo Switch. After all, gaming isn’t complete without experiencing Resident Evil or Super Smash Bros. What do you do when you want to reduce lag for all of your devices, not just your PC? You get a cross-platform compatible gaming VPN.

The best kind of gaming VPN is compatible with all kinds of platforms and operating systems. However, if you can’t find one that properly suits your needs, you can also opt to install your VPN on your router. This will render every device connected to the router to be protected by the VPN.

Of course, what’s a VPN without proper security? Apart from having a VPN for gaming, you should make sure that the VPN is reliable. Security is one of the most important aspects of a VPN. It’s no use if all the previous considerations are checked but it has an insecure connection. This is especially useful to protect against DDoS attacks which have become a bit more abundant in recent years.

Another thing to note is that you should make sure your VPN has a no-log policy. This is just to ensure that your VPN provider won’t log or harbor any of your data. If they don’t have this policy, we highly recommend reconsidering the VPN provider.

If you’re at a loss for where to look, don’t worry because we do have recommendations. Given all the criteria mentioned above, you can narrow down the perfect gaming VPN to a few.

First, there’s LimeVPN which is one of the best ones out there. It checks all the boxes with dedicated servers for games, P2P connection, and a no-log policy. Plus, the locations of its worldwide servers are strategically within known gaming server areas.

Another option would be ExpressVPN. It’s a very well-known VPN and is an excellent option for a gaming VPN. ExpressVPN is fast and meets the majority of the considerations we presented previously. With a low ping rate, a no-log policy, and high speeds, it’s even fit for competitive gaming. If you’re unsure, try it out with a 30-day money-back guarantee.

NordVPN is one of the industry’s top VPN services. Most people would know about it by now, but others don’t utilize it as a gaming VPN. It’s actually a great option if you’re on a budget and still want the best gaming experience. NordVPN supports multiple platforms with high-speed servers that support P2P connections. They also have great security with encryption and protection against DDoS attacks. You can even try it out for 30 days and if it doesn’t suit you, you can get your money back.

Lastly, CyberGhost is an easy-to-use gaming VPN for all your gaming needs. It has apps available for most gaming platforms and you also have the option to install it on your router. This will ensure that you can have VPN protection on all your devices. CyberGhost has multiple gaming servers worldwide with P2P and a zero log policy. It also has a 30-day money-back guarantee so it’s risk-free to try it out and see for yourself.

Gaming VPNs are certainly a great thing to have for the casual gamer and even a necessity for the pro-gamer. You can’t have your games and wins be sabotaged by an intensely high ping. If you want to reduce the frustration of lag, a VPN is a highly recommended tool. Plus, it’s a great add-on for your data security since these days, physical security isn’t the only concern anymore.

10 Best Chromecast Games to Play with Your TV 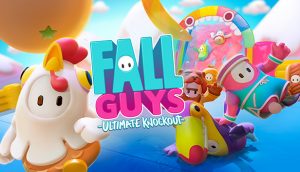 Fall Guys: Ultimate Knockout Guide to Getting That Crown