The Internet of Things (IoT) has been taking over the modern day technology and has been used in different industries. We are now able to collect, process and send data to other objects, applications or servers.  IoT protocols enable these objects to communicate and exchange data securely.

Everyone is familiar with the short-range wireless technology, Bluetooth. It is best for personal use and wearable devices such as headsets and speakers.

The new Bluetooth Low-Energy (BLE) Bluetooth Smart has been introduced in the market is a significant protocol for IoT devices. It offers a similar range with Bluetooth but is designed to offer significantly reduced power consumption.

WiFi is the most popular out of all protocols as WiFi is readily available on most homes and places. No need for much introduction for this IoT network protocol as most people use WiFi. The only downside of this protocol is that it can consume excessive power for some IoT devices.

Message Queue Telemetry Transport (MQTT) IoT is a message protocol. This type of protocol id mostly used for monitoring remote areas in IoT. Its main task is to obtain data from different electrical devices. The MQTT protocol contains three core mechanisms, Subscriber, Publisher, and Broker. The Publisher generates and transmits data to the Subscriber. While the Broker ensures the security of the data.

This is the preferred option for all devices that are IoT based because it has the capacity to provide enough information-routing functions to the cheap low-memory power-consuming and small devices with the help of vulnerable based networks.

Zigbee is an Internet of Things protocol that is low-power, low data-rate wireless network usually used in an industrial setting.  Zigee and Zigbee Remote Control are popular for supplying secure, low-power and scalable solutions along with high node counts.

Long Range Wide Area Network (LoRaWAN) is an IoT protocol for the wide area networks. Smart cities are the ones who uses this protocol.

Its frequency may vary from network to network and the data rates run between 0.3-50 kbps. Depending on where you are, LoRaWAN ranges varies. For urban settings, its range is 2 to 5km. On the other hand, the range is about 15 km for suburban settings.

Unlike LoRaWAN, NFC or Near Field Communication is a technology that enables simple and safe two-way interactions enabling devices to share information at a distance that is less than 4cm. It allows the users of the electronic devices, mostly smartphones to perform contactless payment transactions, access digital content and connect electronic devices.

Cellular technology is the technology of mobile phone networks. But it’s not its only use. It is also suitable for IoT devices that need functioning and controlling over longer distances. These applications can take advantage of cellular communication capabilities such as GSM, 3G and 4G.

The cellular technology has the capacity to transfer high quantities of data but its power consumption and expenses are also too high. Because of this, it can be a perfect solution for projects that only sends small amount of data.

Sigfox IoT protocol can hold speeds of 10 to 1000 bits per second when transferring low-data and only consumes 50 micro-watts of the power. The frequency of this internet of thing protocol is 900MHz. It can cover a range of 30-50 km on rural environments and 3-10 km on urban areas.

Z-Wave is a low-power radio frequency communications technology that is primarily designed for home automation products such as sensors and lamp controllers. It uses a simpler protocol more than others which can enable faster and simpler development of this IoT protocol.

Neul is similar in concept to Sigfox and is also operating in the sub-1GHZ band. It leverages very small slice of TV white space spectrum to deliver high scalability, high coverage and low-cost wireless network.

Its systems are based on the Iceni chip allowing it to communicate using the white space radio to access the high quality UHF-spectrum now available because of the analogue to digital transformation. Data rates can be anything from few bits per second up to 100kbps over the same single link. 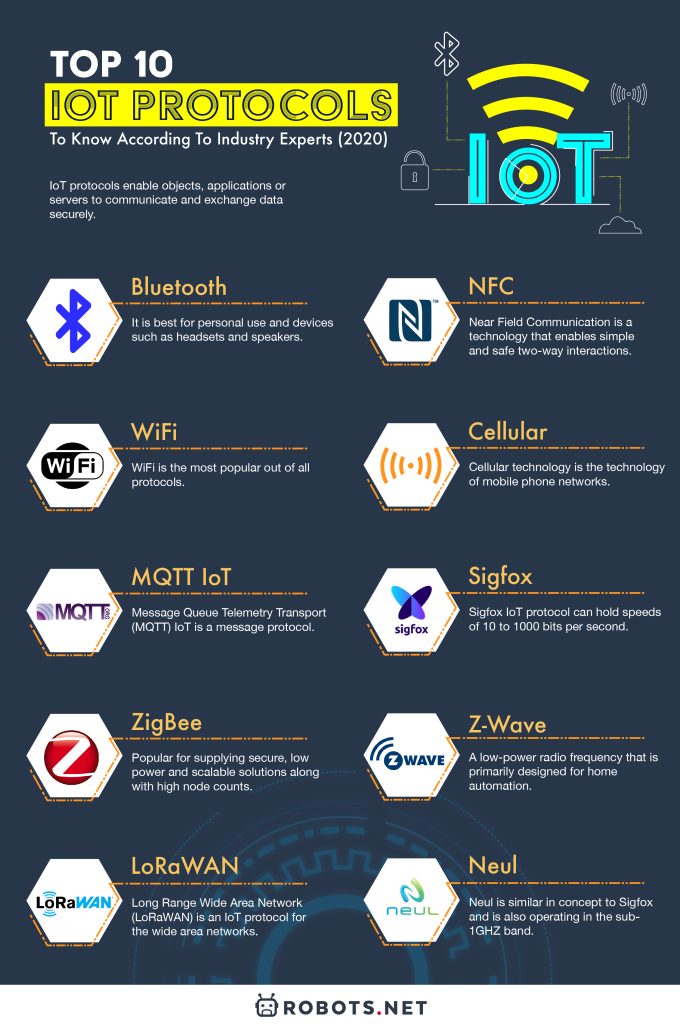