Pokemon Go is one of the most popular applications of the 2010s. Niantic balanced a very faithful rendition of catching Pokemon while implementing technological breakthroughs. You have a game that started with hype thanks to the Pokemon franchise, but it has now evolved into a cultural phenomenon. Continous new features, events, and a sense of community among Pokemon fans are a big reason for their success. The game is so popular that even people want to play Pokemon Go on PC. However, the game is only playable for mobile phones and it’ll be hard to replicate that. Or is it?

Playing games that are exclusive to consoles and mobile phones on a PC is prevalent. Emulators for every console or device are downloadable for free as we speak. Emulators are not only available on PC but also for mobile phones. There is a good reason why emulators are famous, you might be able to play Pokemon Go on PC with the right one.

Just a reminder, you might need a good anti-virus program to make sure your computer is safe when you download one of these emulators!

What are emulators and how can they copy another device?

Another famous form of emulation is when an operating system. You can take a computer that’s meant to run on another OS and use programs and features from another. This is also done when playing retro video games on your PC, which is a process called Low-Level Emulation. The computer or host will copy the environment the guest program runs on. This allows the computer to run games and other forms of software.

Another form of emulation simulates the functions of specific hardware. High-Level Emulation copies a hardware function instead. This is possible through a process called hardware abstraction.

Now that we know the function of an emulator and how it works, let us now see how you can play Pokemon Go on PC.

Before we discuss how to play Pokemon Go on PC, we should know what are the requirements.

First, you need to have a working phone that is capable of playing Pokemon Go. You will also need an OS emulator that will allow you to play mobile games on a PC. One of the more popular ones is Bluestacks. Download an Android or iOS emulator and install it on your PC. Then, after installing it you will need a lot more programs and some patience.

Next, downloading a fake GPS simulator is necessary. As you know, Pokemon Go makes use of the player’s location to track where you are. This is helpful when you’re looking for a specific Pokemon that is near you. Your location will also allow you to access Pokestops and Gyms. These landmarks are important when restoring your consumables or joining raids. After doing all of this, you can now look for a good Pokemon Go APK. Download that APK file which you can install on your PC.

Now that you know what you’ll need, let’s talk about the step-by-step process. But before that, you might want to check the item below and catch monsters with one click.

How to Play Pokemon Go on PC

Let’s start downloading stuff and discuss the step-by-step process on how to play Pokemon Go on PC.

First, you will need to install the Android or iOS emulator of your choice. This is important as your PC itself would not be able to run mobile games on its own. Once your OS emulator is set up, you can download and install the root app you’ll want to use. If you are using Bluestacks, you can use Kingroot in the app itself after installing it. This will now allow you to access your phone’s OS.

Afterward, you can run the program you’ve chosen to gain permission on your phone’s operating system. Once successful, you can then install the location spoofing program of your choice. Remember to turn off the location settings on your end. Not doing so will interfere with the spoofing process. Once you’ve set-up your location, you can proceed to install the Pokemon Go APK on your OS Emulator.

There you have it, you can now play Pokemon Go on PC!

Having the option to play Pokemon Go on PC is not forbidden, but it is not meant to be played that way. The biggest issue with this is it can lead to your account getting revoked or banned. Spoofing your location is against the rules and regulations of the game. It is also a form of cheating as you now have access to region-exclusive Pokemon in an instant.

Our website does not promote piracy or cheating in a game that builds communities. Pokemon Go is more fun when making new friends. Grinding is part of the process, and if you need help in maximizing results, you can check out these Pokemon Go cheats and tips.

This post is to inform people that you can play Pokemon Go on PC. However, it is the players who’ll have the last say if they will abide by the rules. 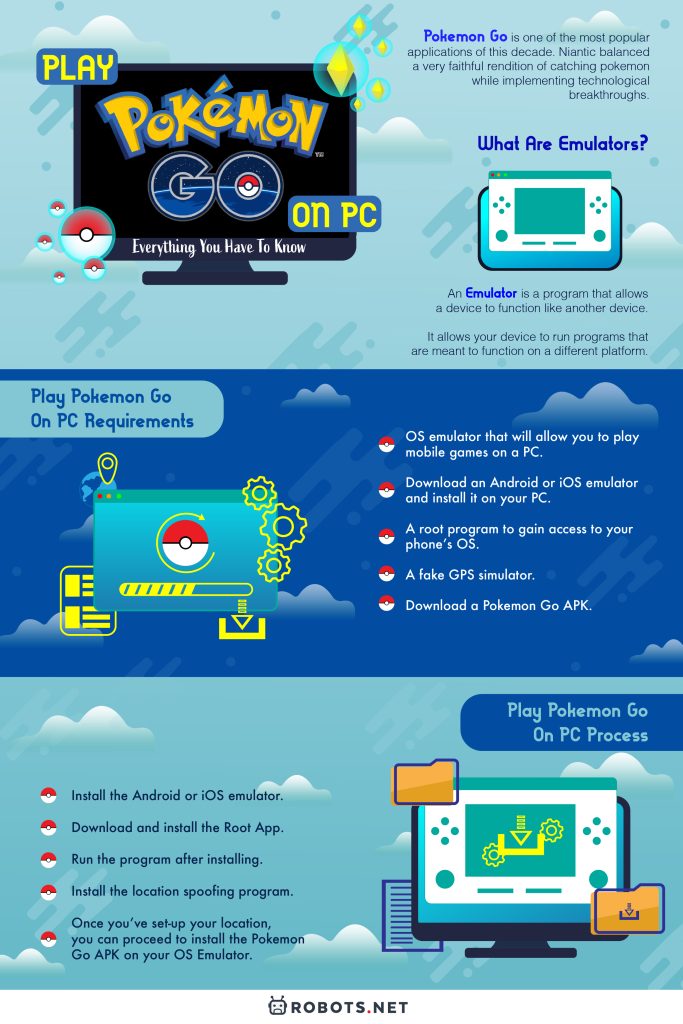