With a myriad of patches, Dota 2 has a new hero come out every once in a while. Some of them can be pretty busted, others come out well, and some have something interesting that makes them unique. Today, we’re going to talk about Hoodwink, one of the newer heroes to come out on Dota 2.

Who Is the Dota 2 Hero Hoodwink?

Hoodwink used to live a peaceful life with no cares, living in the edges of Krimwohl, a vast expanse of green trees and grass. However, Krimwohl grew in scope, and eventually, the needs of its people and army grow great. Various individuals began to fight it out for the best cut of the land, to devour it to line up their coffers.

This caused many of Hoodwink’s friends, and even Hoodwink herself, to immediately walk away from their homes. They have few options here: they could either stay, fight, and die — that’s the first option. They could also go to the pacified zones, with an uncertain hope of finding refuge. And lastly, they could tempt fate by going north, to the Tomo’kan.

Hoodwink chose the last option, it was here in these treacherous woods that Hoodwink plied her trade. From dodging the vicious and dangerous predators to allying herself with some of the local banditries, finding, and causing mischief, and more.

Eventually, though, Hoodwink decided to see what exactly these Krimwohls are all about and left her new home temporarily. What she saw opened her eyes: these people aren’t monsters, they’re just people. Every day, normal people, who were just doing what they’re told. Compared to the dangers that the Tomo’kan have, they’re pretty much a cuddly comparison.

Because of this, Hoodwink left her more dangerous home to strike those that try to destroy it. From stealing their items to attacking them, she does all this while leading those who, like her, were once refugees into a new home.

Play Dota 2 on your PC today!

What Type of Dota 2 Hero Is Hoodwink?

Hoodwink is a ranged agility hero with a lot of quirks in her kit that benefit a roaming playstyle. Her various skills have a lot of versatility and lend well to players that want to gank whole lanes and ambush fleeing heroes. With enough coordination and a player that knows the map intimately, Hoodwink can terrorize the enemy team, while her teammates destroy key objectives and march to victory.

What Is the Role of Hoodwink in Dota 2?

Hoodwink is usually played as a Nuker/Position 4 as her abilities can lead to several cool ganks. Her Scurry allows her to get to places fast, while Bushwhack can stun enemies for a time for her allies to get to her enemies. Sharpshooter is a great way to pick off stragglers, as any enemy hero with low HP can be instantly killed when it’s maxed out.

Hoodwink can also be played as a Midlane hero, especially if the player rushes Falcon Blade. Falcon Blade is pretty much her go-to item in the early game, due to its myriad of benefits with low cost. The item only costs around 1100 gold, 90 gold more than 2 Wraith Bands, but gives similar benefits.

Hoodwink always makes use of anything that she can find. In terms of projectiles, she finds out that Oak and Ironwood acorns not only hurt the most but are also the most numerous.

When used, Hoodwink’s attack is accompanied by an acorn at the target unit or area. When it reaches the area or target, the acorn proceeds to bounce to nearby enemies. This reduces their movement speed and deals a percentage of Hoodwink’s attack with some bonus damage. Also, if Hoodwink targets an area instead of a target, the Acorn will create a tree on the target area.

Hoodwink usually conducts her ambushes on the Ironwood groves she favors. However, one must always keep a keen eye and wary step in the entirety of the mistwoods.

Hoodwink proceeds to toss a net that damages and immediately applies a stun on enemy heroes. However, this only happens if there’s a tree in the area. When Bushwhack hits, enemy heroes affected are dealt damage and immediately pulled towards the nearest tree. Their vision is also reduced to 0 for the stun’s duration.

Hoodwink’s paws know every nook or cranny in the Wood of Tomo’kan.

Hoodwink has a passive that gives her a chance to evade physical attacks when trees are in Hoodwink’s vicinity. Its active ability allows Hoodwink to obtain phased collision, increased movement speed, and tree-walking for a few seconds.

Hoodwink puts a decoy illusion to a location of her choosing. When attacked upon or hit by any targeted ability, the Illusion is immediately destroyed. It will then proceed to throw a lesser bushwhack towards the enemy that destroyed it.

Hoodwink throws a boomerang at any targeted enemy that flies in an arc. When it hits, the boomerang immediately returns to Hoodwink. It deals damage to any enemy that it passes through and also puts a Hunter’s Mark. Enemies marked with the Hunter’s Mark are slowed down and receive increased spell damage and reduced status resistance.

Hoodwink’s first arbalest was a chance discovery that made her into what she is today. Now though, Hoodwink ensures that her new arbalest is taken care of, including carving and maintaining it herself. Of course, the components that are made out of it are pretty much either taken or made by her own hands.

Hoodwink stays still and proceeds to charge up her arbalest. After a few seconds, she fires a deadly bolt. When it hits an enemy hero, it gives slow, breaks, and heavy damage. The damage and debuff duration that Sharpshooter scales up to its maximum output after 3 seconds of charging. The bolt is immediately fired after 5 seconds have passed. After firing, Hoodwink is knocked backward from the force of the shot.

Now that we’ve talked about Hoodwink’s talents, let’s start talking about what items you should use from the start to the end of the game.

Best and Worst Hero Matchups for Hoodwink in Dota 2

Now that we’ve talked about what items to get for Hoodwink, let’s talk about who she’s good and bad against. Do note that these are merely analyses of how Hoodwink’s and their abilities work against each other. It’s still up to the players to leverage these abilities to get the highest

Here are the Dota 2 heroes that Hoodwink is effective against.

Sharpshooter isn’t canceled when Lion uses Hex or Earth Spike. Do note though that Hoodwink’s low HP makes her vulnerable to Finger of Death.

Husker needs to be at low HP to thrive. This makes him very vulnerable to burst damage abilities like Hoodwink’s Sharpshooter.

Abbadon’s Borrowed Time can be disabled by Sharpshooter, allowing Hoodwink’s teammates to kill him easily.

Bushwhack can be used to stun Phantom Lancer and his illusions, and Acorn Shot is great for finding the real PL. In addition, Sharpshooter can disable Juxtapose, Phantom Lancer’s ultimate. This stops him from creating more illusions and allowing Hoodwink’s team to kill him.

Like Huskar, Morphling likes to play Dota 2 with low HP. This makes him very vulnerable to a fully charged Sharpshooter. Do note though that this only works on the early game and midgame.

If you can find him in a tree, Monkey King can be stunned using Bushwhack. Acorn Shot can also find Monkey King because it can be ground targeted.

Meanwhile, here are the Dota 2 heroes that Hoodwink players might want to steer clear of.

Timbersaw uses trees constantly to amp up his damage. However, he’s also very notorious for cutting trees down with his abilities. This, of course, would be bad for Hoodwink as Scurry’s passive requires trees to function.

Storm Spirit can easily nuke down Hoodwink due to how low her HP pool is. In addition to this, Storm can easily get close to Hoodwink due to Ball Lightning. He can even destroy trees with it when they’re in his path while using this ability.

Warlock’s Chaotic Offering destroys trees in an AoE in addition to the summoning, stun, and damage. This, combined with Upheaval, makes Hoodwink’s life difficult as she cannot retreat easily.

Beastmaster’s Wild Axes can be used to cut down trees. This is already pretty bad, but Aghanim’s Scepter upgrade makes it so that this ability no longer has any cooldowns. The moment that the axes come back to Beastmaster, he can throw them again, and again, and again. This isn’t good for Hoodwink’s play.

Zeus can easily burst down Hoodwink due to how much damage his abilities deal. A combo of Arc Lightning, Lightning Bolt, then Thundergod’s Wrath can easily nuke Hoodwink’s HP to oblivion. When Zeus gets Nimbus? Well, Hoodwink better be prepared to have a bad time.

Techies tends to put mines in trees, especially Remote Mines. A savvy Techies player can use this to his advantage by killing a low HP Hoodwink when she’s trying to retreat. Even their Proximity Mines can kill Hoodwink with enough of them placed in an area.

If you are in search of a new hero to try, the new Dota 2 hero Hoodwink should be on top of your list. Mixing a blend of crowd control, damage, and escape ability, Hoodwink is pretty unique. She can also fulfill multiple roles depending on what your team needs. 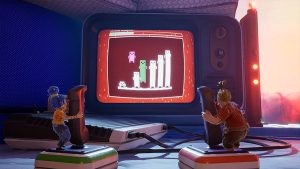