Virtual reality (VR) is becoming the next big thing in the community of application developers. This is why most programmers are familiarizing themselves with VR programming languages they can use to develop applications in this segment. But unlike iOS and Android applications, programming for VR requires a different level of skills and knowledge.

As this technology continues to evolve, more businesses are capitalizing on the monetary angle of virtual reality. This means more opportunity is opening for programmers willing to learn VR programming languages. To get ahead in this technology, you must learn which programming languages you can use to develop an enticing virtual reality experience.

Like with any other application development, the language you will use for virtual reality coding depends on what you want to accomplish. From all the applications being developed for VR, gaming is still the top one for VR devices. Dive in to these different VR programming languages you can use in all virtual reality devices.

JAVA is created at sun Microsystem and currently owned by oracle. This object-oriented language is a great choice for VR applications. This vr coding language is very useful especially in building algorithms such as language processing, search and neural networks algorithms and those are essential aspects of any VR application that works online.

This may be an older programming language, but it is still important in vr programming. It is also one of the first languages taught in most computer engineering program because it provides all the high-level features needed to deal with different aspects in VR application development.

In re-using code and updating software, JAVA is flexible. Aside from this, it has a JAVA 3D API which enables VR applications to generate 3D images, track the position and orientation of user’s body creating an astonishing user experience.

If you haven’t mastered this coding language, Unity has a wide range of enlisted designers so you can easily get the help you need and advanced development tool worked by other Unity engineers. Unity also implements a lot of the components of C#, making it also a popular choice for augmented reality programming.

If you are looking to develop a more advanced application, C++ and Unreal is the vr programming language for you. This language is very difficult to learn and is very extensive in nature. Unreal is the nearest rival of Unity and is also the major component of game engines.

If you are just looking at creating a relatively small vr application, C# is what you can use.

Since this language is understood by most browsers, it works well for the WebVR platform involved in creation of web based virtual reality applications. If you are looking for a programming language for vr applications for the web, this one is definitely for you.

Python offers a lot of benefits especially for beginner programmers because it is the easiest programming language to learn. This is a good language to learn especially for someone who is looking to start in the field of VR development. Moreover, it is pretty straightforward to understand and allow its users to develop ideas with fewer code lines.

Developers can create VR projects easily due to several interesting packages associated with Python, which has a unique way of downloading and resolving issues. Because it’s an easy language, programming for vr apps is much faster. Plus if you have a good foundation in Python, you can easily transition to C# (Unity).

React is a framework for the programming language, JavaScript, for building user interfaces. React has a library called React 360 which is used to create virtual reality experiences.

Unknown to majority of people, Small Talk is an object-oriented, dynamically typed reflective programming language. It is the language behind Open Cobalt and 3D Immersive Collaboration. Also, it is used for programming virtual reality applications.

Groovy is a java-syntax-compatible object oriented coding language used in a Java platform. Not as popular as the other vr programming languages, Groovy has similar features with Python, Ruby and Small Talk. Hence, it is easier for beginners to learn this language. 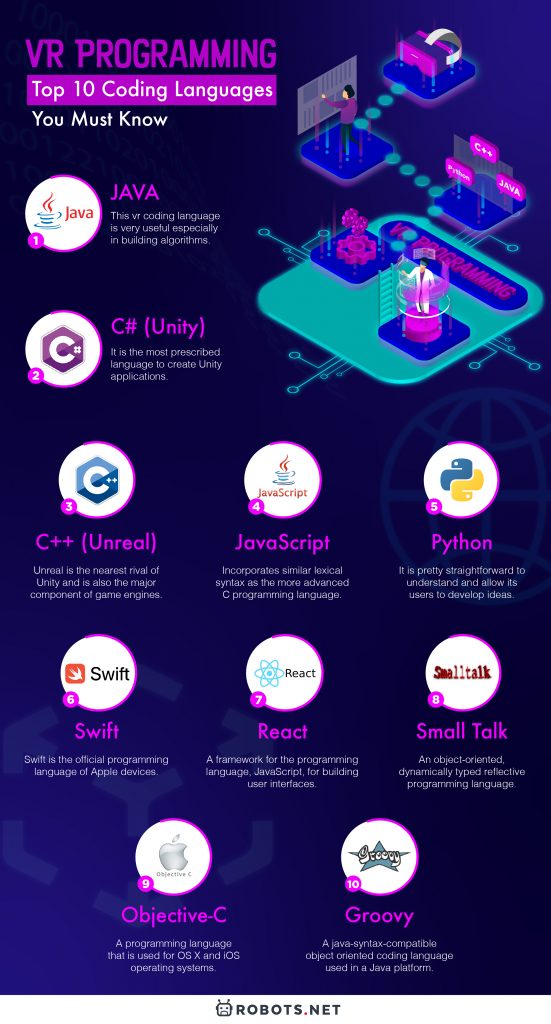