Online shopping has always been a trending shopping method. With the increasing popularity, it’s not a surprise that many organizations strive to improve and revamp their business model in order to fit into the current trends. That means Ford is no exception. So, in order to gain a competitive advantage, Ford’s latest autonomous delivery project aims to bring the best convenience to fellow shoppers.

Ford envisioned a future collaboration between robots and self-driving cars to deliver goods. By incorporating the five feet tall robot called, Digit by Agility Robotics. Ford intends to further innovate and subsume the technology in its vehicles. Eventually, Ford wants to bring Digit to life as a part of the package delivery process. Wherein this part of robotic will be placed at the back of a self-driving vehicle.

What it does is when the vehicle reaches the delivery location, the trunk will deploy ‘Digit’ automatically to carry out package handling process. From here, the robot will pick up the package and drop it at the designated area like the recipient’s doorstep or front porch. With this, it eliminates the need for manpower effectively.

The Concept Of Digit & Its Features

Digit is a two-legged robot that is designed with a distinctive outlook to look nothing like a human but walk and function like a human. To boost its flexibility and versatility, the robot is made out of lightweight material that also allows for longer run time.

Though Digit may look underwhelming, it can carry packages that weigh up to 40 pounds. Besides, the robot also has the ability to go up and down the stairs, walk on uneven terrain, and smart reaction to avoid obstacles. The best part is Digit has built-in stabilizer to avoid trips or fall over.

With a unique design, the robot can fold itself for easy storage at the back of a self-driving vehicle. While some of you might ask how the self-driving vehicle and the robots work together as a team? Ford ensures that both of these mechanics work seamlessly with the perfect blend of information.

Upon arriving at its destination, a set of information like optimizing the best route or pathway for its delivery is through a wireless connection to Digit. Subsequently, Digit can carry out its task to the delivery the package securely.

The robot also comes with LiDAR and stereo cameras. It features enough sensory power that will help the robot navigate through basic scenarios. Should it encounter an unexpected obstacle, it can send information to the vehicle that will then configure a solution.

Ford’s vision was announced in May 2019. However, there is no clear road map yet to create this robot. Regardless, the idea sparks the interest amongst big companies like Amazon and FedEx. In fact, Amazon and FedEx are already testing the wheeled delivery robots as an alternative for manpower.

Ford Starting Its Own Delivery Service?

With this technology, the automaker has been asked if it has any plans to put up its own delivery service. If not, is there any chances that Ford will partner up with other companies to join the delivery service industry. As a reply, Ford declined, stating that they would like to stay focus on producing quality automobiles.

However, the question was raised due to its recent collaboration with Domino wherein they tested pizza deliveries in Ann Arbor, Michigan.

The self-driving delivery vehicle is not the first project Ford aims to launch in the near future. Ford has also announced that they aim to launch an autonomous taxi and delivery service by 2021.

In fact, the carmaker has asked a number of people to try it out last year. However, the results stay confidential. Ford promises that so far everything is moving according to plan and it has received good reviews.

On contrary to Ford’s autonomous vehicle delivery, Starship Technologies have also launched miniature robots that are designed to deliver packages. However, it’s quite distinctively different from Ford’s delivery model as it requires customers to direct their packages to a Starship sorting facility.

Earlier this year, Amazon has announced Amazon Scout, which looks almost identical to some of Starship Technologies’s creations. Powered by an electric battery, Scout has six wheels and moves at a walking pace. Six devices were trialed in a Washington neighborhood.

Also earlier this year, FedEx has announced that it is working on robots to do their short-range deliveries, the SameDay Bot. It is powered by a battery and it is autonomous with the use of a combination of LiDAR sensors.

According to the company, they will initially use the robot to deliver packages between the company’s offices in Memphis. Should their trials be successful, it will expand its service to other companies and retailers. FedEx is already in talks with firms such as Pizza Hut, Target, and Walmart to assess their needs for this type of robot delivery.

With these delivery robots slowly coming to fruition, Ford’s concept seems to be very competitive. 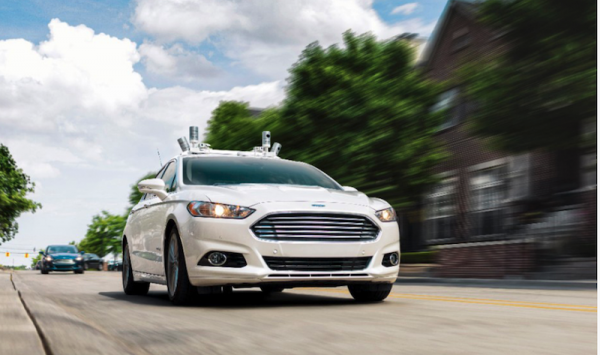 With plans like this on the table, the automaker is putting a solid focus on electric and autonomous vehicles. However, it faces a tight competition against Tesla and Google’s parent company, Alphabet.

Ford has invested a lot of expectations on this and they won’t be slowing down anytime soon.

As autonomous vehicles are slowly taking over the roads, it threatens millions of driving jobs. On the other hand, experts reassure that delivery driving jobs remain safe simply because cars and trucks can’t walk.

However, with the concept of Digit slowly coming into play, who knows?

Is there any more autonomous vehicles in the market? Yes! Click here to find out more.