Marriage is a two-way street, and those who take the plunge to Holy Matrimony know that a marriage is doomed to fail if you don’t work on it together. A failed marriage usually ends up in separation and divorce. However, in It Takes Two, their daughter won’t have it. She’s ready to do everything to keep her parents together.

What is It Takes Two?

It Takes Two is an interesting action-adventure game. The title is published by EA and created by Hazelight Studios. It’s going to be available for the PS4, PS5, Xbox One, Series X/S, and PC.

It Takes Two is set to come out on March 26, 2021, three years after the studio released A Way Out. However, one has to take into account that the game is launching on a crowded calendar, releasing alongside games like Balan Wonderworld, Monster Hunter Rise, and more. The month of March tends to be crowded for new game releases, mostly because it’s the end of the first quarter of the year. Thus, there’s no telling sometimes what else will have the same release date, if you’re releasing with another game, et cetera.

Similar to A Way Out, the debut title of Hazelight Studios, there’s no single-player mode on It Takes Two. The game is only playable through online or local split-screen co-op.

If you’re looking for another multiplayer game coming soon, you can check our preview of Outiders.

Check it out on Amazon today!

It Takes Two is a co-op action-adventure game at its core. However, it does take a few elements from your usual platform games that we’ve become familiar with these days. It Takes Two is made and optimized specifically for split-screen co-op multiplayer. This means that the game has to be played with another person, either through local play or online play.

After creating and releasing A Way Out in 2018 to positive fanfare, Hazelight’s team decided to create a new co-op-only video game. Thanks to A Way Out’s creation, the studio now has a more experienced and refined team for the genre. Also, the team also felt that they have the ability to improve and expand further the various gameplay concepts they introduced on A Way Out.

Because of this, the development team made sure that the gameplay needs to have a connection with the game’s narrative. Also, they have to ensure that the mechanics that the game has will change accordingly as the story unfolds. Fares, the director, encouraged and pushed the team to add in set pieces and mechanics.

They added as much as they can because they thought that a gameplay mechanic becomes “less special” if it is used repeatedly. Fares stated that the game is a romantic comedy. To help with this, Fares also provided himself as the motion capture for Dr. Hakim. Hakim is the couple’s book counselor and is also a pretty key character in the game.

Now as we’ve mentioned, the game isn’t released yet for all consoles. However, we do have information about its development, gameplay, and overall what the game looks and sounds like. So, if you’re wondering what It Takes Two would be, here’s a little preview of what’s to come. Here’s hoping it helps you decide on whether or not to buy the game.

In It Takes Two, the two players take control of an estranged married couple named Cody and May. The two of them are turned to dolls by a magic spell done by their daughter. To return to the real world and their real bodies, the two of them have to work together and rekindle their failing relationship. Of course, they’re not gonna do this alone; they have the assistance of a magical book by the name of Dr. Hakim. Dr. Hakim is the book their daughter asked for help to fix their marriage.

It Takes Two has a few additions from a large amount of game mechanics it borrows from different genres. These mechanics aren’t just gimmicks since they’re connected to the game’s story as well as the level’s theme. For example, there’s a level where Cody gains the ability to turn back time. Meanwhile, May gains the ability to replicate herself. To progress the game’s story, the two players need to cooperate as well as utilize these abilities to the fullest. In addition to this, the game also has a large number of minigames available, which also coincide with the game’s story.

Just like A Way Out, It Takes Two needs two players to be able to progress the story. There are a lot of missions, situations, and minigames throughout the game that need two players to work together. But even if co-op is needed to play, there are a few situations where you just need to do things your typical platformer would make you do on your own. Running, jumping, and other platforming skills will be used here. However, the game also seems to spice up these sections with cool abilities, which will be fun to see.

And yes, you can’t play the game all by yourself. However, it does allow players to team up on online and locally. So long as you have the gear or the internet connection, players shouldn’t have trouble finding another player to play the game with.

Lastly, there is the Friend Pass which will let you gift the gameto a friend. After that, you can then play It Takes Two alongside said friend. To do this, the players need to install the free demo. After that, they’ll then be able to play It Takes Two alongside the one that gave the Friend Pass even if they didn’t buy the game. Do keep in mind, though, that crossplay with Xbox and PlayStation players can’t be done on Friend Pass.

The game has a lot of levels with very unique backgrounds. One level is on a greenhouse, where Cody added in a chess set that his wife loved dearly, implying that you need to play a game of chess to pass through it. Another level is on what seems to be inside a clock with gears all around you. Yet another level was on a winter snow globe, and the list goes on. The game’s graphics look as unique as the implied gameplay, and we can’t wait to see what it’ll look like when it’s released.

Is It Takes Two Something to Look Out For?

If you’re looking for what looks like a great co-op game to play with a friend, then you might want to save some money for It Takes Two. The game looks like it’ll follow Hazelight’s A Way Out as yet another co-op gaming masterpiece.

How Does It Takes Two Compare to Other Co-op Games?

Now It Takes Two isn’t the only co-op game out there. In fact, there are a few co-op titles that have a built a good name for themselves. For now, though, here are four co-op games that might catch your interest. These games are A Way Out, Portal 2, Cuphead, and Enter the Gungeon.

We can’t talk about It Takes Two without talking about A Way Out, Hazelight’s breakout co-op game. And from what we have seen so far, the main differences between the two games seem to be the graphics and gameplay.

A Way Out is grittier in its graphics, which makes sense due to the story’s nature. Meanwhile, It Takes Two is a more whimsical tale about rediscovering lost passions, love, and rekindling relationships. The graphics and the music understandably reflected that shift.

Other than that, It Takes Two also seems to have more minigames and collectibles compared to A Way Out. However, any other comparisons will be left up in the air until It Takes Two is released.

On the other side of the spectrum, some games have both co-op and single-player aspects to them. One of the most popular titles that have this feature is Portal 2.

Portal 2, of course, has a single-player campaign that was considered to be one of the best stories in the art form. After relishing through the story, you can also play a pretty great multiplayer campaign starring ATLAS and P-body, with GLaDOS frequently interacting with the two.

The game’s multiplayer still has the great puzzles that made the series so beloved. The hilarious interactions between both the two bots also add to the game’s charm. Because there are 2 portal guns, you can make a total of two pairs of entrance and exit portals throughout the game. In terms of various minigames, Portal 2 won’t back down, with a minigame or two for each challenginging level.

Next up on the list is Cuphead, which was a real hit when it was released. The game featured some of the tightest shoot-em-up gameplay ever seen on modern titles. It also helped that the stages are incredibly diverse and visually appealing. From a plane that turns into a crescent moon to giant robots, dragons, and more, your eyes will never run out of interesting things to look at. You control Cuphead—his brother Mugman is also available if you’re doing co-op—to gather the souls of people that made contracts with the Devil. As for why they need to gather said souls? Those people violated their contracts and the Devil wants to collect.

Cuphead is graphically more cartoonish than It Takes Two. They’re drawn in a sense that harkens back to animation in the 1920s through to the 40s. The game makes incredible use of the old-timey graphics, which amuse the player while they’re currently getting the butts blasted by the difficult bosses. However, it’s the unforgiving gameplay that is Cuphead’s claim to fame. The absolute bullet hell that they throw you and your friend into will make you balk if you’re expecting an easy fight.

All of the bosses you encounter in Cuphead have different phases to keep you on your toes. You will die frequently, but that’s part of the fun. Trial and error is a thing in Cuphead, and you need to endure a thousand failures if you want to succeed. Remember that you only need to win once, so try and try again until you finally beat that boss that’s been giving you grief for the past few hours.

Last but not least is Enter the Gungeon, which is a co-op roguelike shooter. The game is an incredibly hard affair, even on single-player, which is pretty worse on multiplayer when bullets start to fly all over the map. You control an individual who went to the Gungeon to change something in the past that they regret. The Marine wants to erase the shame of him running away from the dimensional horror that his corps died to by fighting alongside them.

The Convict wants to undo her arrest, fighting back against the one that set her up. The Pilot wants to undo the death of his friend who he left on a Hegemony Flagship. Lastly, the Hunter wants to defeat Dr. Wolfenclaw, who stuck her in a cryo pod when he defeated her.

The game features a whole lot of bullet hell, incredibly butt-clenching gameplay, and cool, retro-style graphics that pump the players up. If you’re looking for a cool co-op game that you and a friend can sink your teeth into, you may want to try out Enter the Gungeon. 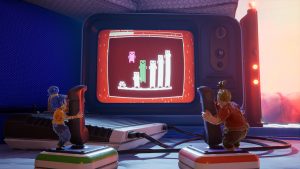 It Takes Two Preview: Everything We Know So Far