Robots like R2-D2 and C-3PO captured the hearts of Star Wars fans around the world when the movie was first released. Now, the successor to those adorable robots is none other than BB-8. Its cute, round body and quirky movement mechanism easily enthralled everyone who saw it. However, what people didn’t expect is that the robot wasn’t simply CGI but a feat of good engineering. Thanks to that, kids all over the world can enjoy their own BB8 remote control toy. Which toy is ideal for your little tyke? Let’s find out.

What Is a BB8 Remote Control Toy?

At first, the Star Wars BB-8 robot featured in The Force Awakens might have seemed like a gimmick. Most people thought it was simply CGI and that a droid like that couldn’t exist in real life. However, Disney (and several toy manufacturers) managed to prove everyone wrong when they introduced the first BB8 remote control toy.

Through this toy, you could control your little BB-8 droid and make it move just like in the movies. The body moves using a motor and wheels housed right inside the BB-8 remote control toy’s shell. Moreover, it uses either gyroscope technology or weights to stay balanced no matter where or how it moves.

On the other hand, the mysterious head that stays on manages to do so through magnets and built-in wheels. Pair that with a deluxe remote control, and you’ve got yourself a real-life BB-8! Thanks to this great design, it’s certainly the closest you’ll ever get to Star Wars robots in real life.

You can find Star Wars toys like the BB-8 remote control robot almost anywhere nowadays. You can easily buy a BB-8 robot online through sites like Amazon. The most notable toy manufacturer there is Sphero, but there are tons of other BB-8 droid toys out there, too.

On the other hand, you can also buy BB8 robot toys from other retail sites. You can also head directly to a manufacturer’s website, like Sphero’s, to purchase straight from the producer. If online shopping isn’t your thing, there are also BB8 remote control toys available in domestic stores.

All that said, to eliminate the hassle of finding your own toy, we’ve round up the top 10 best BB8 remote control toys you can buy today. 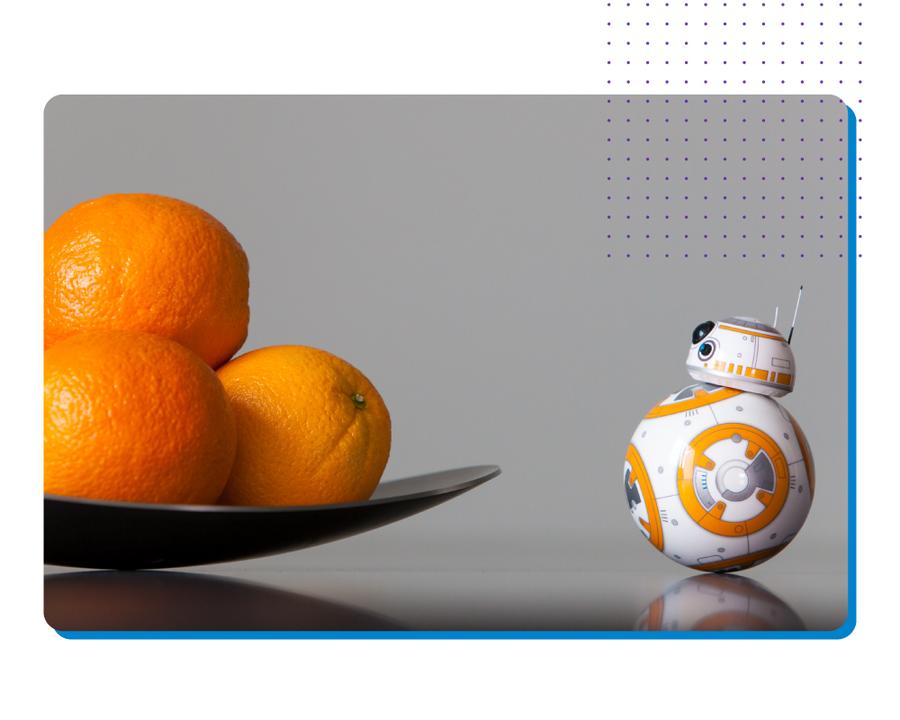 One of the best BB8 remote control toys is the BB-8 App-Enabled Droid By Sphero which you can get with a trainer. With a watertight polycarbonate body and a 4-hour battery life, it’s the perfect toy for energetic kids to play with.

It’s also a great BB8 remote control toy for folks who need something versatile. That’s because you can control this Sphero BB-8 through either the BB-8 Droid App or Force Band. Whether you prefer something interactive or something more convenient, you can go either way in a pinch. 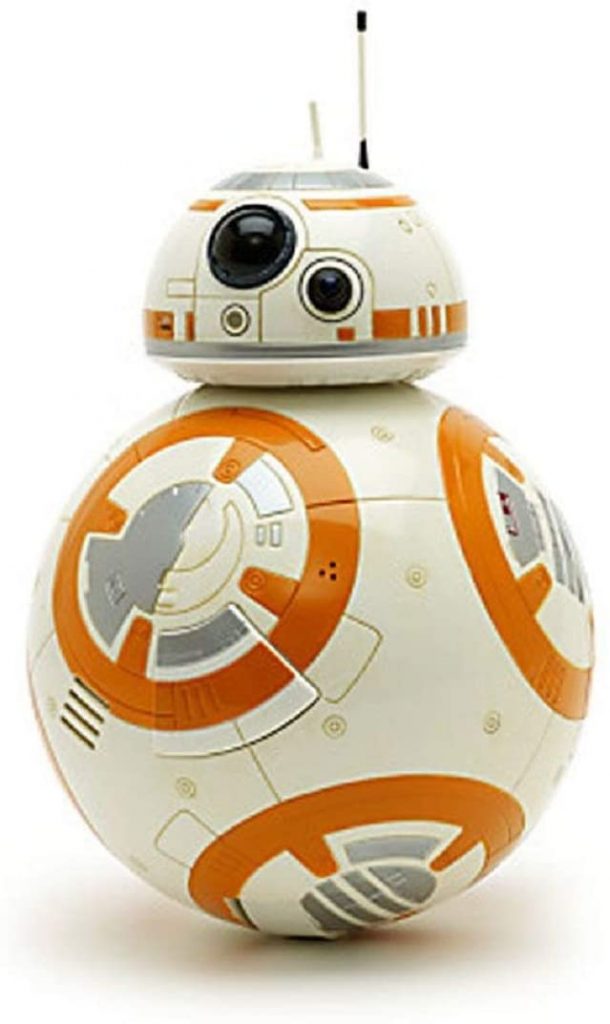 Some BB8 remote control toys might have cool high-end features, but they’re not always suitable for younger kids. Thankfully, the Disney Star Wars The Force Awakens BB-8 Talking Figure eliminates this problem by removing choking hazards. With it, you can safely let your three-year-old enjoy its authentic BB-8 movement, 17+ sound effects, and built-in lights.

However, while younger kids might enjoy this toy, older ones might find the effects a little boring over time. Moreover, the auto-run time frame is short, so it could disrupt playtime sometimes. Nonetheless, it’s good enough if you have a very young BB-8 superfan. 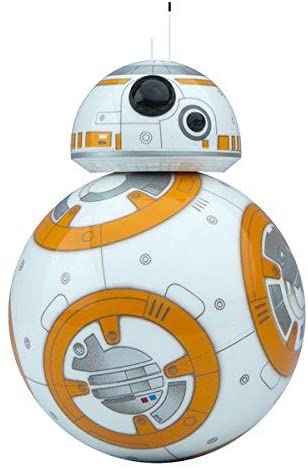 Another one of the best BB8 remote control toys comes from none other than the famed Star Wars Sphero. That’s right, we’re talking about the Original BB-8 by Sphero that all fans love and adore.

One of the coolest features this BB-8 remote control toy has is undoubtedly its free-roaming ability. Turn it on and you instantly have a pseudo-sentient robot that detects impact through various sensors. On the other hand, you can also operate it down to the last detail through the accompanying app. Add to that a rechargeable battery and voice recognition technology and you’ve got the perfect BB-8 companion at your disposal! 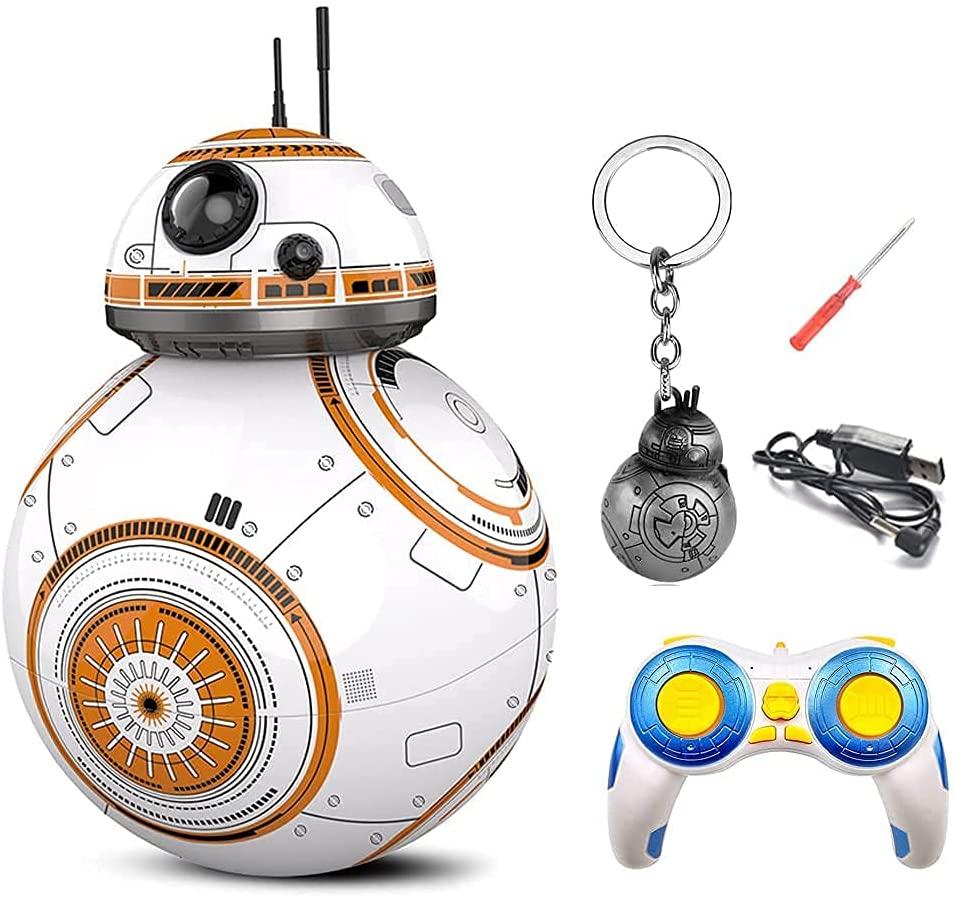 Buying a BB8 remote control toy can be difficult thanks to all the options available. However, if you have a three-year-old Star Wars fan, finding something that’s not a safety hazard is the top priority. If that sounds like you, look no further than the Pinjeer Star Wars BB-8 RC Remote Control Figure Robot.

Like other toys, this BB droid can roll 360°, go where you want it to, and even emit lights. However, what makes it unique is that there’s an automatic patrol feature that lets it move autonomously. You can simply watch BB-8 fumble around to find a route or play with it via remote control. Moreover, there are also various sound effects housed within its chassis, including gunshot sounds, battle sounds, and more. 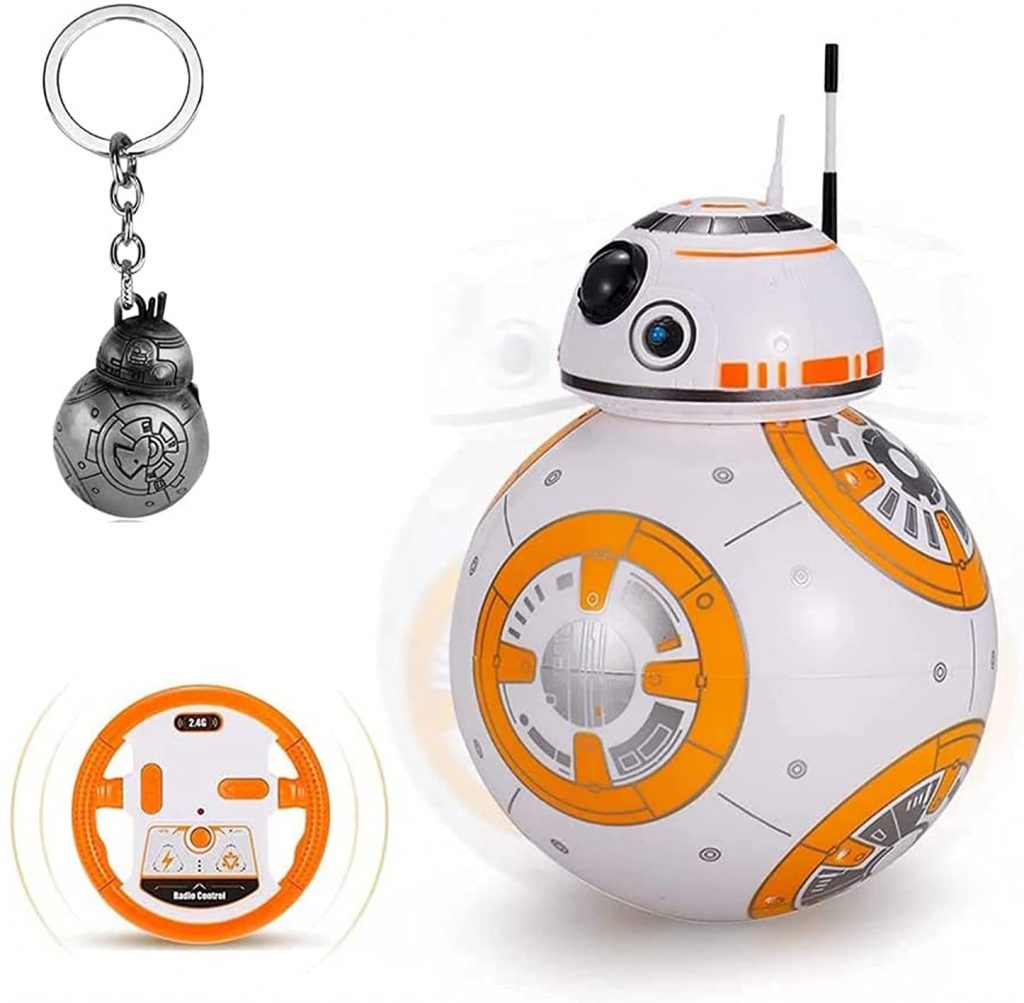 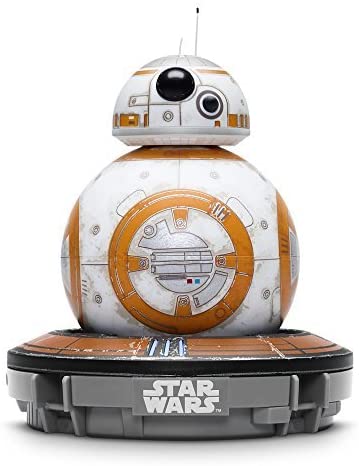 The Special Edition Battle-Worn BB-8 by Sphero Including Force Band isn’t a special edition for nothing. That’s because this BB8 remote control toy introduces a variety of features that the original Sphero didn’t have. The most notable one being the Force Band which comes included in the package instead of being sold separately.

With it, you can maneuver the toy simply through gestures or use the smartphone app in case you get tired. Moreover, this BB8 remote control toy also comes with a custom design, making you the envy of all your friends. Of course, this means the Special Edition is more of a collector’s item than a toy for kids. Nonetheless, if you’re a die-hard Star Wars fan, this model is a must-have. 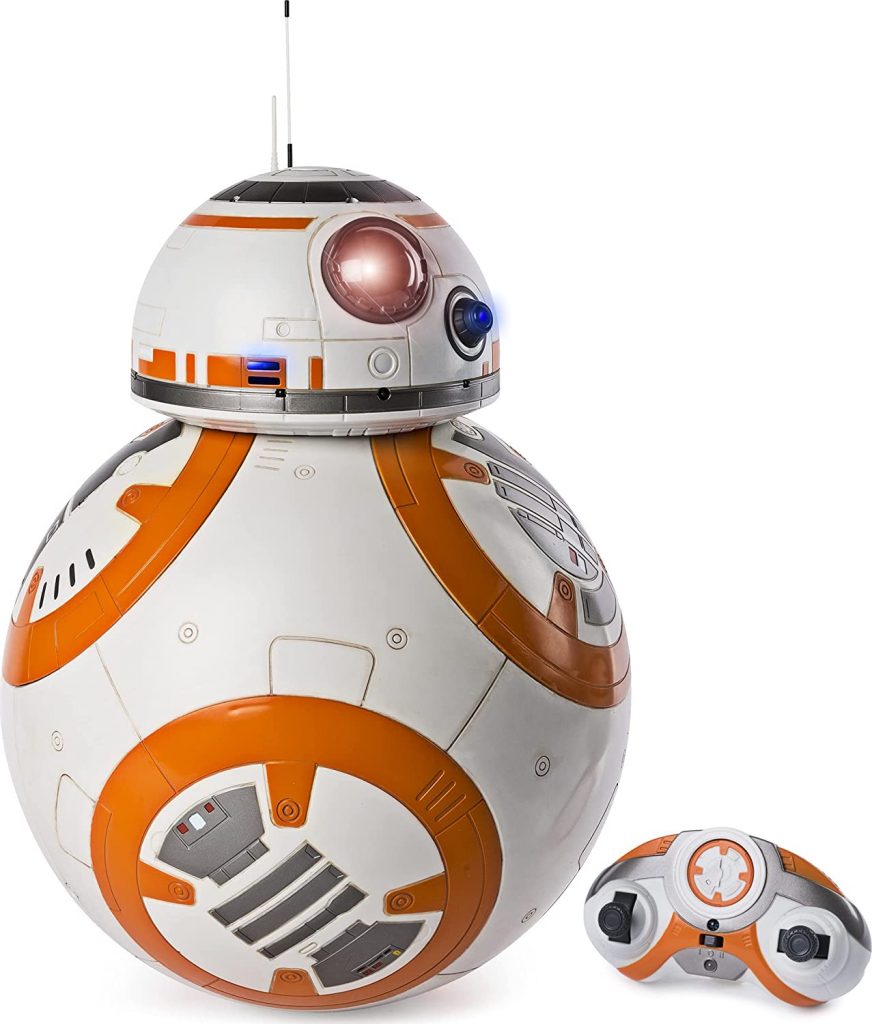 Another great BB8 remote control toy is the Star Wars – Hero Droid BB-8. It’s the best choice out of all the options if you want something that looks and feels realistic. That’s because the size itself is pretty large, making you feel like it’s the real BB-8. Moreover, its interactive features give some life to the otherwise mechanical-feeling robot.

What are those interactive features, you ask? Well, they exist mainly in the form of how you control the robot. There are three modes: remote control, voice recognition, and “follow me.” The first two do exactly what they claim to do and work incredibly well. However, the “follow me” is the real hooker as it makes BB-8 follow you around just like the real BB-8. Living out your Star Wars fantasies has never felt more realistic. 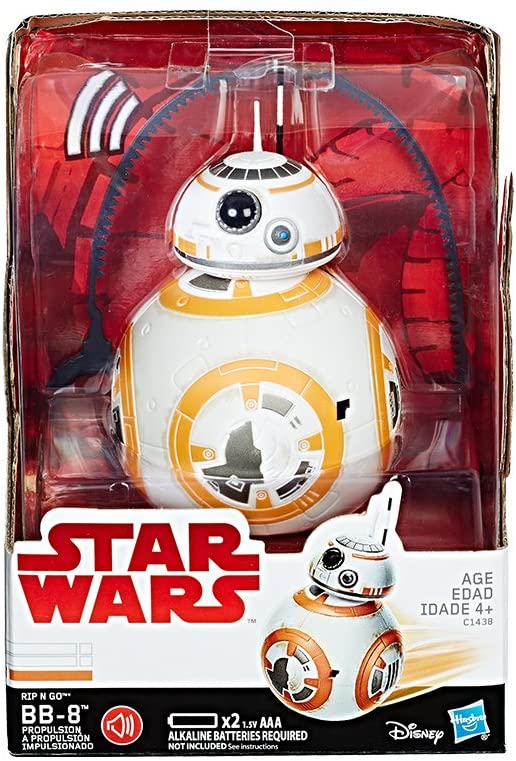 Another great option is none other than the Star Wars Rip N Go BB-8. However, it isn’t exactly a BB8 remote control toy because it moves via a ripcord instead of remote control. As a result, the toy only goes straight and doesn’t have interactive features like other models. Regardless, it’s a good choice if you’re a fan of both Star Wars and Beyblades made by Hasbro. Moreover, it’s also small — about 8 or 9 inches — so it’s great for display purposes or small kids. 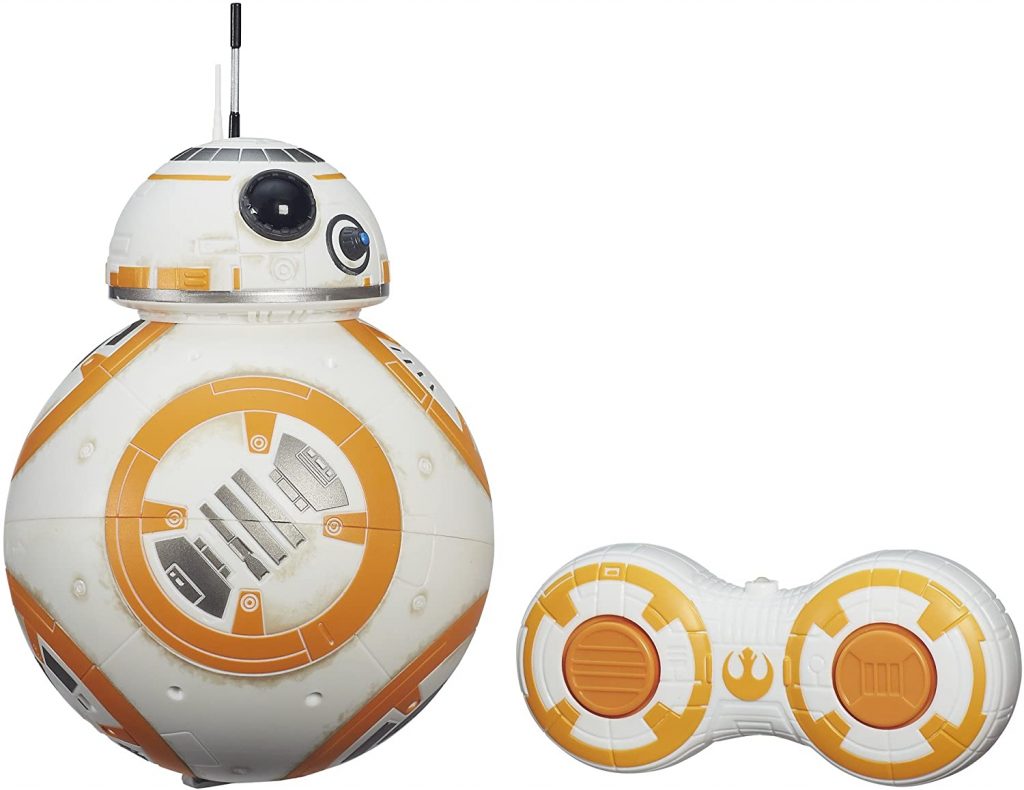 The Star Wars The Force Awakens Remote Control BB-8 Toy is another great choice for fans of the franchise. It’s cheaper than some of the other options on this list which makes it great for folks on a budget. However, don’t expect it to come with a lot of features. This BB8 remote control toy only operates via remote control and it’s not as durable as other, more expensive alternatives. Moreover, it requires some assembly and the head magnet isn’t as strong (though it does have sound effects). Nonetheless, it’s a decent choice if you need something more affordable than the others. 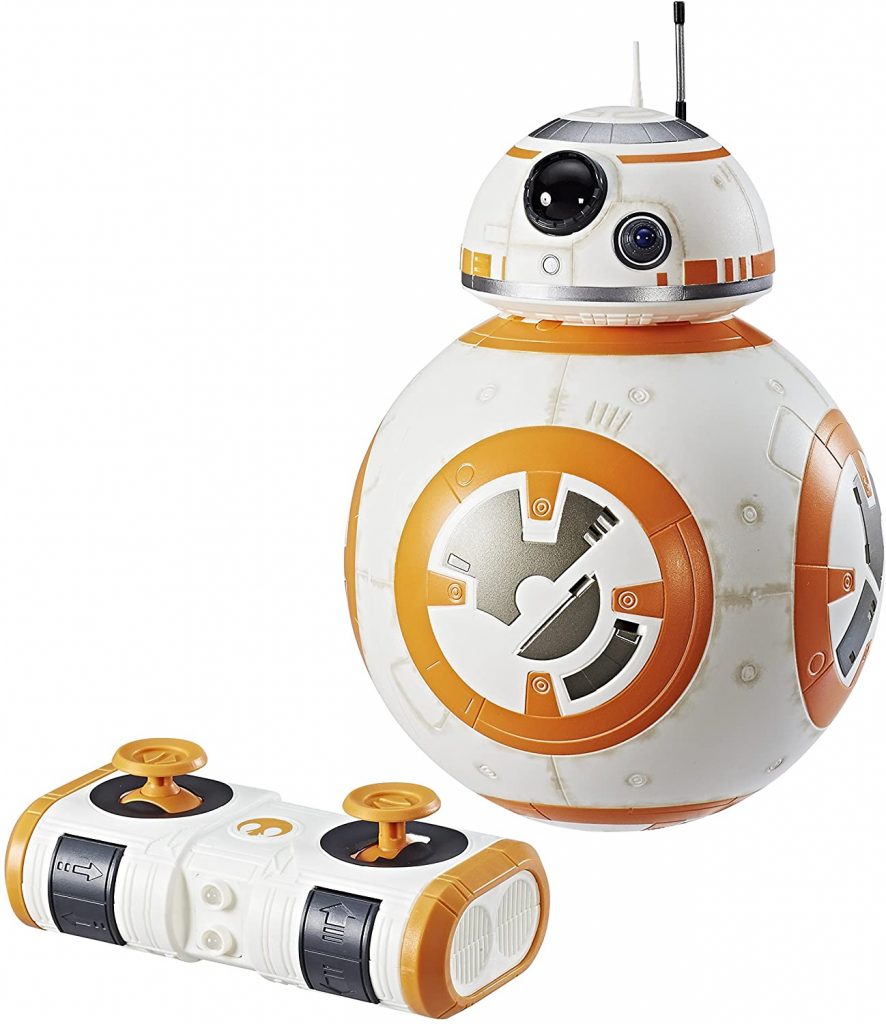 Last, but not least, we have the Star Wars: The Last Jedi Hyperdrive BB-8. Like other BB8 remote control toys, this one emits lights and produces sounds that make it more life-like. However, what truly makes it unique is its ability to go into “hyperdrive.”

Normally, your kid would maneuver the droid to move in various directions using the left and right joysticks. However, as it moves, the toy also builds up electricity that your child can “release” later on. This makes for tons of fun and should preoccupy your child for a long while.

What to Look for When Buying a BB8 Remote Control Toy?

Purchasing a BB8 remote control toy can be a big investment, especially if you’re getting the more expensive variants. That’s why you must know what to look for before you hit that “purchase” button. What are some things you need to check before you make a purchase? Let’s find out.

There are tons of BB8 remote control toys out there asking you to buy them. However, you don’t necessarily have to give them all the time of day. Narrow the list down to a few with good features that will suit your (or your child’s) needs.

For example, if your kid is on the younger side, make sure to buy one that’s not overly complicated. Tons of features are great but choking hazards and a smaller learning curve should be your top priority.

On the other hand, older kids (and adult collectors) might want more feature-rich options. For that, consider purchasing something that’s trainable, has motion sensors, and is controllable via an app. Once you narrow down your needs, you can choose from among the options based on the feature set you want.

Of course, one of the biggest considerations when purchasing a BB8 remote control toy is the quality. No one wants to buy something that breaks easily the next day (or worse, the same day). Hence, it’s important to check the reviews and see which models are more durable. Something built with good materials and has a nice weight to it should mostly do the trick. However, you should also balance this out with the next factor to consider.

Yes, the last and arguably most important consideration is the pricing. Some of these BB8 remote control toys can be incredibly expensive, costing more than $200. If you have the money to spend then go ahead and buy the most expensive product. However, if you’re like most people, you’ll want something that’s within budget, has reasonable features, and is decently built.

Brighten Your Day by Getting a BB8 Remote Control Toy Today!

The world of Star Wars has certainly boosted the toy industry, but we’re not exactly complaining. After all, having your own BB8 remote control toy is pretty cool, especially if you’re a big Star Wars fan. With that said, make sure to carefully weigh your options before you choose which to buy. Once you’ve landed on a decision, you can simply wait for it to arrive and then have fun.

Venmo Recurring Payments: Is It Possible?

How Do I Know If My Venmo Payment Went Through? – Answered 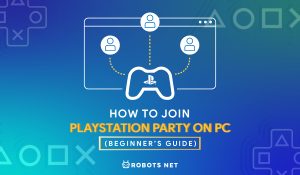 How To Join PlayStation Party On PC (Beginner’s Guide) 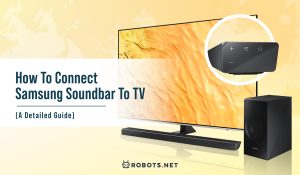 How to Connect Samsung Soundbar to TV (A Detailed Guide) 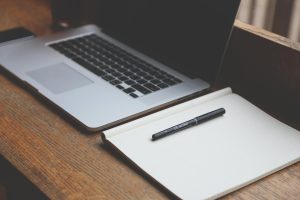 MacBook Black Screen of Death: Everything You Have to Know