All you need to know about Augmented reality is that AR is an interactive experience of a real-world environment, where the objects that reside in the real world are enhanced by computer-generated perceptual information, sometimes across multiple sensory modalities, including visual, auditory, haptic, somatosensory and olfactory. Let’s talk about the best-augmented reality companies now.

The primary value of augmented reality is the manner in which components of the digital world blend into a person’s perception of the real world, not as a simple display of data, but through the integration of immersive sensations, which are perceived as natural parts of an environment.

Sincerely saying, AR today is the true evil cause that’s what purely occupied our minds and hearts for now. Therefore, we made a research on the market top 10 AR giants of 2019 to keep you informed with this everyday changing reality.

Let’s dive in together and explore them!

Founded back in 1992, the Program-Ace software development company now is in the top three AR/VR developers in 2017 according to Clutch. The company is oriented on creating custom-tailored interactive AR apps, using ARKit, ARCore, Vuforia, OpenCV, Unity, Unreal Engine. Also, the main industries they work for, are agriculture, education, manufacturing, insurance, gaming and entertainment, marketing, healthcare, architecture. Finally, one of their latest project, Wheel Replacement Training, adopted for AR and MR, is available in App Store, Google Play and Windows Store.

From 2009 on this Dutch enterprise’s focus is on custom AR solutions and tools/kits to develop AR apps. But their true passion is bringing life to print objects around. Layar app (iOS/Android) lets users scan magazines, posters etc. and enjoy additional digital content in form of videos or animations. Another feature is Layar Creator – to build AR items, flyers, landing pages by simple drag-n-drop. Lots of developer tools and assets, so it is always useful to follow the updates.

Presenting holographic large-scale film experiences in augmented reality. They built a special system to demonstrate various scenarios and moving objects visible even without AR glasses, and people can move around and see it all from various angles. Metagram has patented its all-axis space hologram, and they offer it to other businesses, advertisers, artists, etc.

Great service to look into for those who plan to drive the sales of their e-commerce efforts. Augment specializes in B2B solutions that connect retailers and online shoppers, and display products in 3D augmented reality. This targets more sales and engagement. Great AR platform with separate tools tailored for manufacturers, retailers, marketing agencies, educational entities, and other businesses.

INDE is a fully integrated, award-winning Augmented Reality product developer, with more than 200 mobile, kiosk and large-screen AR systems – featuring both licensed and custom 3D content – deployed worldwide since 2011. Its client roster includes some of the world’s leading entertainment and education brands such as National Geographic, The Smithsonian Institution, BBC, Universal, 20th Century Fox, WWF, and numerous others.

HQSoftware is one of the most trusted augmented reality companies. The company delivers complex projects across multiple verticals including manufacturing, healthcare, marketing, education, and others.

Since 2004, VironIT has successfully applied the most cutting-edge technology to produce remarkable VR and AR projects for their clients. Firstly, the company provides full-game and entertainment development services, leveraging the talent of seasoned software engineers. Finally, VironIT chooses optimal solutions for quality services. Also, it makes the best use of the material and time resources required for the project.

Privately owned, NEXT/NOW, has transported people to the future, to virtual racetrack pits, and to peaceful bioluminescent forests. Its projection-mapped walls, floors, tables, sculptures, buildings, and vehicles have sent users to new worlds, while their mixed-reality applications have put fans in the shoes of their favorite athletes. Finally, NEXT/NOW connects people with brands in deeply immersive environments that dial up the “wow” factor.

Scanta is one of the amazing Augmented Reality companies. Also, headquartered in New York and San Francisco, Scanta specializes in delivering unique concepts in Augmented Reality. Also, the AR company also liaised with global brands like Apple and Google to create emojis for their products. 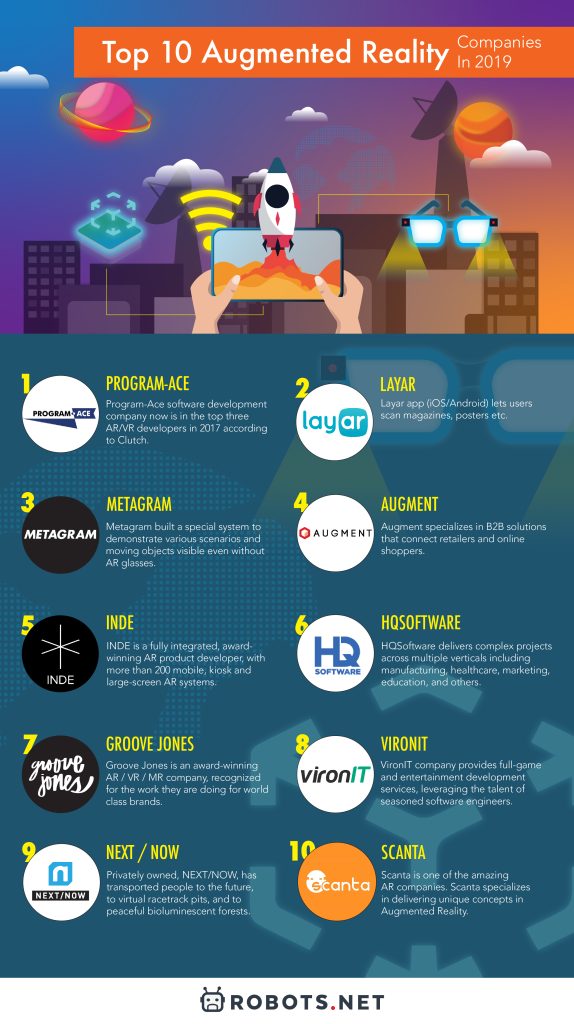